Amok is a term of Indonesian origin that has found space in modern English due to the numerous episodes of murderous madness that took place in southeast Asian countries and began to be used outside those contexts.

The term is equivalent to Juramentado with which the Moro guerrillas who launched themselves with the white weapon are known in the Philippines to kill as many people as possible, expecting to be killed to end their murderous madness.

Unfortunately, cases of violence are also happening in Europe today using cutting weapons and with this methodology of attack linked to psychopaths(see the case of Turin in 2019) and terrorist attacks with the aim of creating terror and insecurity in society.

Statistics on the types of attack of assaults with cutting weapons speak for themselves.

Often you hear in the news episodes of violence without motivation where a man walks down the street armed with a knife or axe and kills for no apparent reason the people he encounters regardless of the fact that he will be taken or killed.

The term amok (sometimes also spelled amuk or amuck) is a cultural syndrome typical of the regions of Southeast Asia, Malaysia, Indonesia and New Guinea.

The word refers to a temporary condition of violent and murderous fury.

Cases of amok are described by Georges Devereux.

The explosion that marks the debut of the Amok originates from an offense received and experienced as intolerable or, also, from the accumulation of tension linked to the enduring of subsequent ones.

The subject who is affected by this syndrome, after a brief phase of relational withdrawal, attacks first family members and then strangers, in an uncontrollable crescendo of murderous fury.

In the access of violence he runs very fast through the streets and between the fields and then, finally, collapses.

The manifestation of violence is then followed by amnesia and melancholic exhaustion.

Amok Twilight psychopathological state characterized by a sudden murderous madness, which arises as a result of sudden shocks caused by exceptional events, and of which, once passed, no trace remains in the memory. 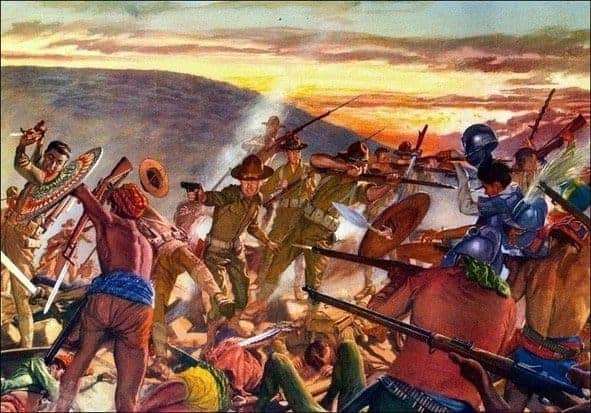 The dynamics of Amok and Juramentado

Episodes with these dynamics have therefore happened very often in recent years also in Europe.

Both Amok and Juramentado express in a concept of insane violence with the knowledge of not going back, the goal is to kill as many people as possible.

There is no personal defense that in front of an aggressor in the grip of murderous rage/madness serves if you immediately do not understand that you need to kill before being killed if you want to stop such an aggression.

A total change of approach that takes you to the extreme limit of survival.

In this case it is not a discussion, a robbery,etc. but a killer who cares nothing, without a reason of cause, simply murderous madness.

With this assumption, a psychological adaptation is essential,in which the dynamics of road or duel are eliminated but we enter into a psychological condition linked even more to pure survival.

In this context you have to build a specific workout because it’s not a duel but a person armed with a knife or other object that runs at you like a madman whether you are naked or with a knife, they do not care if you kill or hurt him, it is a murderous madness.

While fortunately the campaign to subdue the Moros of the southern Philippines no longer exists and the problem of the solitary Juramentado has been solved even today there are several episodes of news of white-armed assaults combined with murderous madness.

When you hear the news of a person “running amok”, this is reminiscent of the origin of the word and the brutal and effective Juramentado of the Philippines!

Now train to survive a gunman who runs like a madman against you regardless of his safety need for specific training.

It’s no longer an armed assault for the purpose of robbery but a drug-addicted and adrenaline-fueled lunatic who wants to kill you.

Now to train correctly and safely you need a series of protections for those who play the part of the crazy because to make the phases of the clash effective it is necessary that you can really hit your training partner.

To train this situation you need to structure your training with the use of appropriate protections to bring maximum aggression to the attack and your ability to defend yourself.

It is not something for everyone and a gradual step in training is needed.

Consider that the dynamic is not one that attacks you and does not want to be hit, but is a madman who wants to hit you regardless of being hurt or killed.

Train yourself to react to a full-run assault on you in amok and juramentado style.

This can also be a useful exercise for assaults in short fencing tournaments!