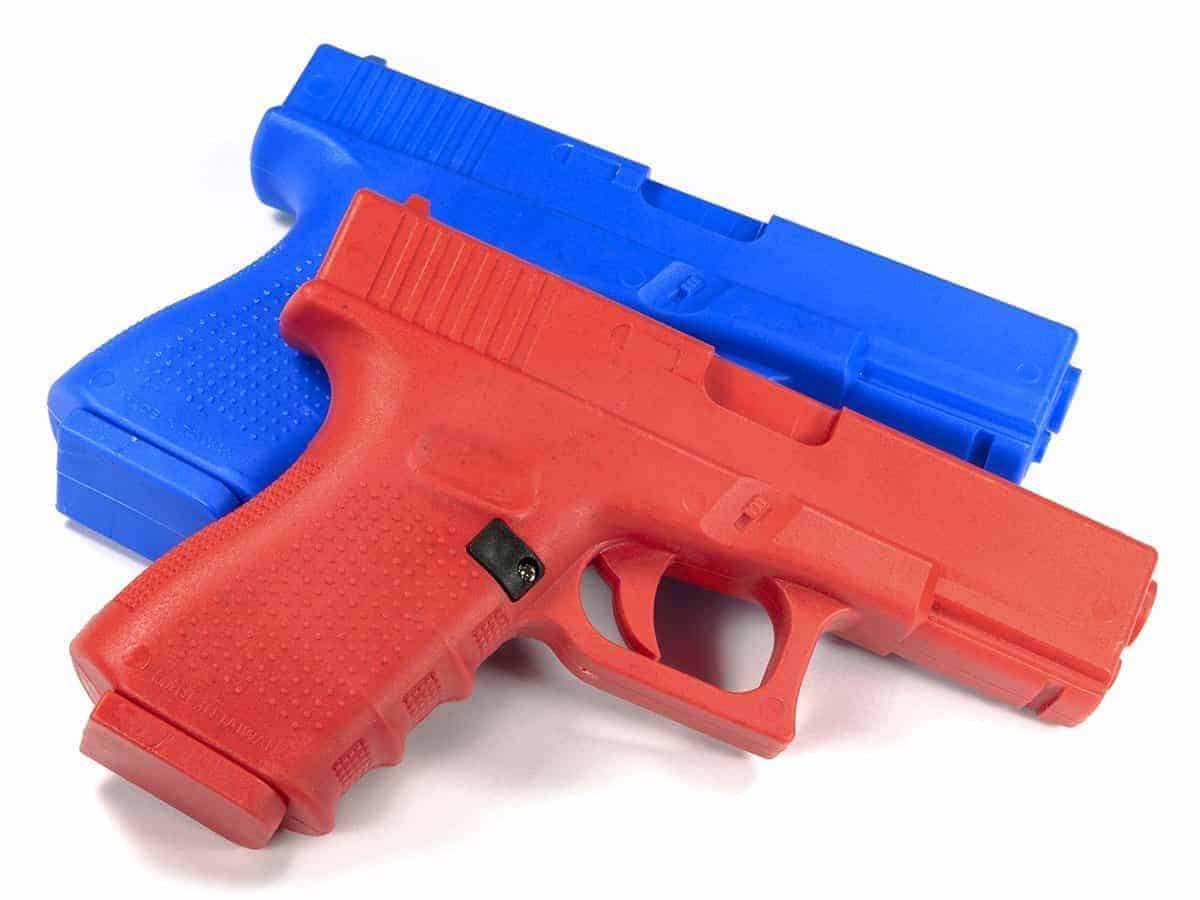 Blue Gun, the training weapons for training with firearms but not only.

One of the necessities when starting training with firearms is to work safely and blue guns or if you want training guns are a useful tool in some phases.

A safe alternative to using the real discharge weapon to understand the first procedures and begin training with firearms and practice a series of simulations and exercises using blue gun simulacra the same size as real weapon models in order to safely perform a series of tactical and technical exercises.


At some stages of tactical-operational training with firearms, some beginners sometimes make some mistakes regarding safety.

The Blue Guns and the Study of Disarmament

Industry experts can in real-case applications, test their technical skills on attacks and disarms such as knife but with firearms (Pistol, Rifle, etc.).

Help with these training phases comes from plastic/rubber simulacra, the so-called “Blue Guns“.

I want to point out that when we talk about simulations with weapons it is always about operational tactical shooting so training conditions in training or dynamic shooting to understand us never of the classic battery-powered polygon shooting.

I also tell you about all those phases that are not contemplated in sports shooting such as the control of the weapon by an attacker, the close disarmament from different positions, the use of the weapon in an unconventional way.

PS. Firearm disarmaments are an exercise that you can also explore out of personal curiosity but reality is something different because no one comes close to the point of being touched if he has a weapon in his hand, but the study is useful for some extreme cases where if you know how to do something it is better but percentage as a statistic, firearm disarmaments are more a cinema thing than a reality thing.

However, there are phases of training that concern the protection of the weapon from a theft or an attempt to extract from the holster of an aggressor during a phase of struggle standing or on the ground, etc. where it is recommended to use simulacra also to avoid damaging the weapon discharged during the fight phase. 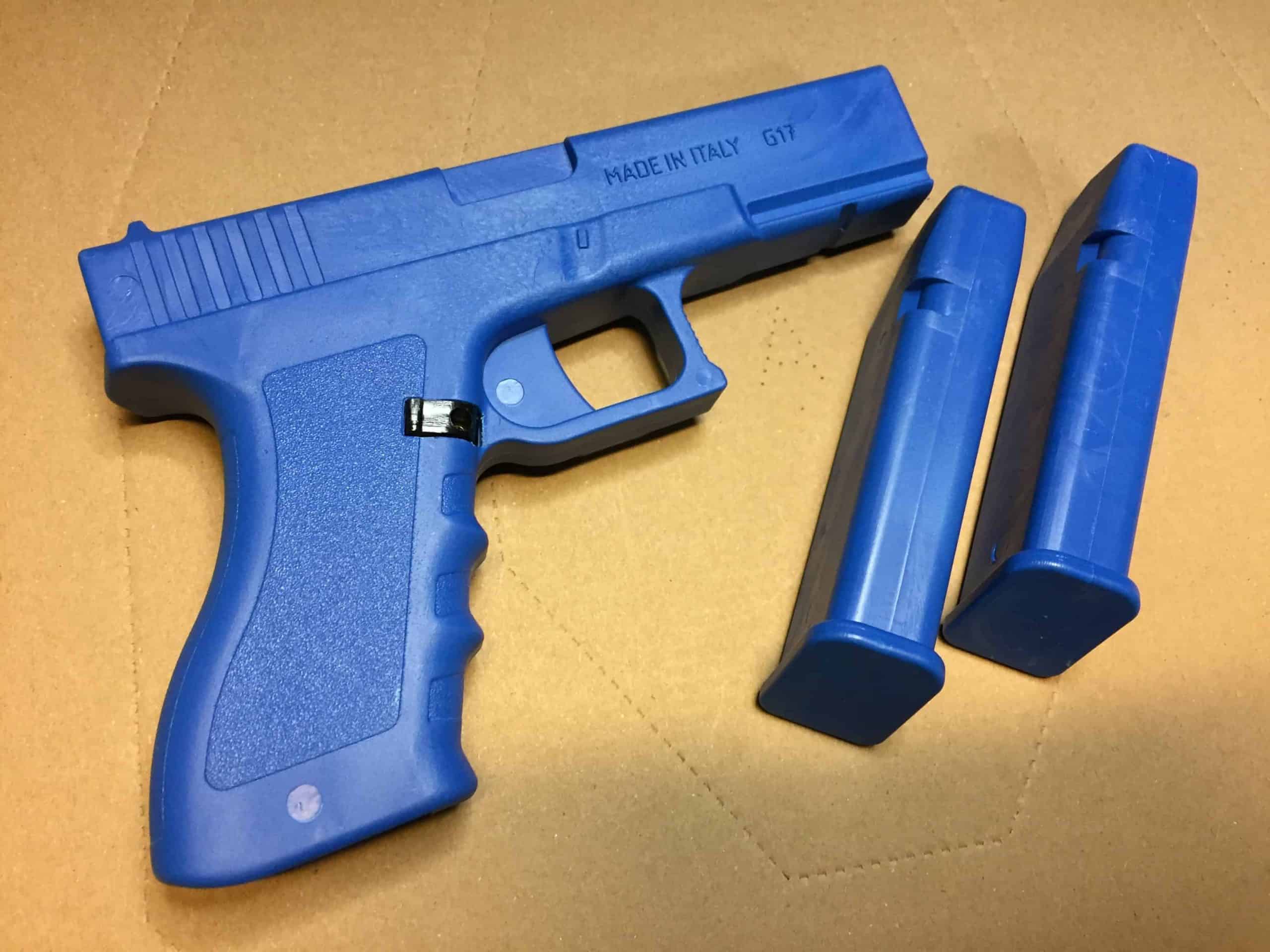 If you do an internet search you’ll find that statistics of fatalities occurred during trainings carried out by special groups (then highly specialized personnel), especially duringForce on Forcetraining, or man-to-man training.

The “Force on Force” is the highest degree of operational training that you perform using SoftAir weapons, paint, Simunition.

Weapons are often indistinguishable from real weapons or in other cases are the same real weapons that use special cartridges.

Despite the prevention observed in terms of safety and the high degree of specialization of the participants, in recent years, during these trainings, very similar to reality, there have been about 280 fatal accidents, which occurred for the wrong use of weapons and real cartridges.

There are now entire very detailed and accurate lines of blueguns, “Firearm Simulators” with models ranging from the pistols of various manufacturers and shotguns and automatics but the common thing that distinguishes them is the color blue.

Ps. Although today there are all colors but as an official choice the training weapon has the color blue.

One change I make to my blueguns is to insert a laser pointer into the barrel to always have a clear direction of the barrel in the various stages.

Every gun you use should be manufactured in“Law Enforcement Blue” – the most recognized safety color in the world. 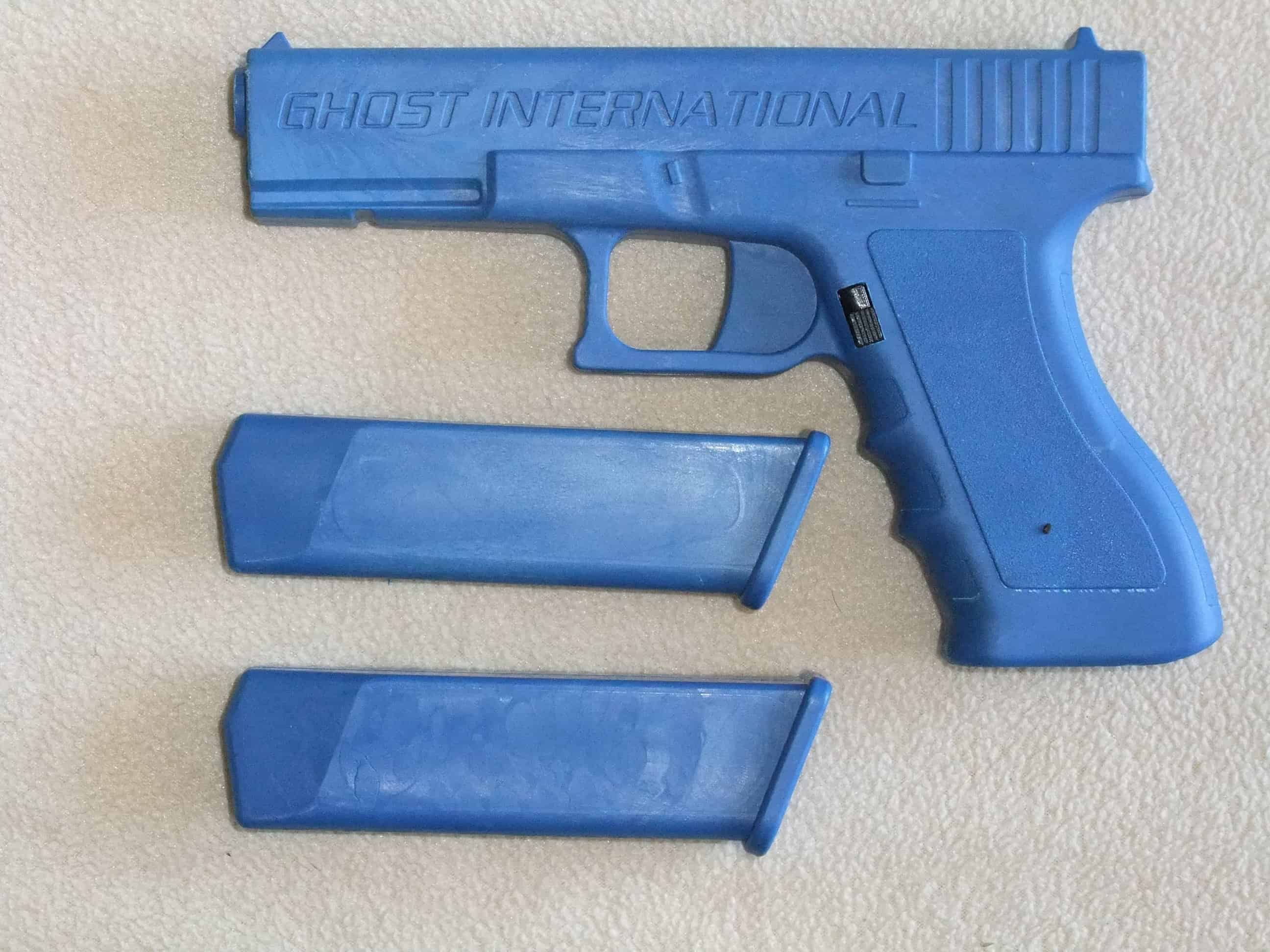 The Blue Gun and its variants


The” BLUEGUNS“, are a useful realistic and safe alternative to the use of real firearms in training situations, but today you also see different colors as recognizable as red, orange, green.

This name then refers to the simulacra of weapons in solid polyurethnic plastic that were initially, by convention, completely and only blue.

Today, as I told you, you can find on the market simulacra of blue gun weapons, whether short or long, yellow, red or green, for example I have orange ones but in any case bright colors that allow you to immediately distinguish inert weapons from real ones.

Repetitive and unin dynamicsal movements in front of a counter of a static or sports shooting training, make the most of accidents compared to dynamic simulations with weapon extractions, magazine change, movement and fire from different positions.

The operational/defensive shooting, on the contrary, requires the operator to perform complex movements and manipulations of the weapon, even emergency, often being in motion.

The instructor’s task becomes more complicated and delicate when the fire position is not static but takes place on the move and moving with the gripped weapon generates several safety issues.

The most common errors

To ensure that accidents do not occur during these particular trainings, Blue Guns will be used, at least as long as the correct and safe movements are internalized.

The use of blue guns allows you to develop safety and speed in the handling of the weapon by building the correct sequences of movement.

Errors can be corrected in real time by avoiding doing so at the end of the exercise that involves too long passing from the error.

Inert weapons are useful in the primary phases of Force on Force training when you have to reset your mind, not being used to pointing the weapon at a real opponent. 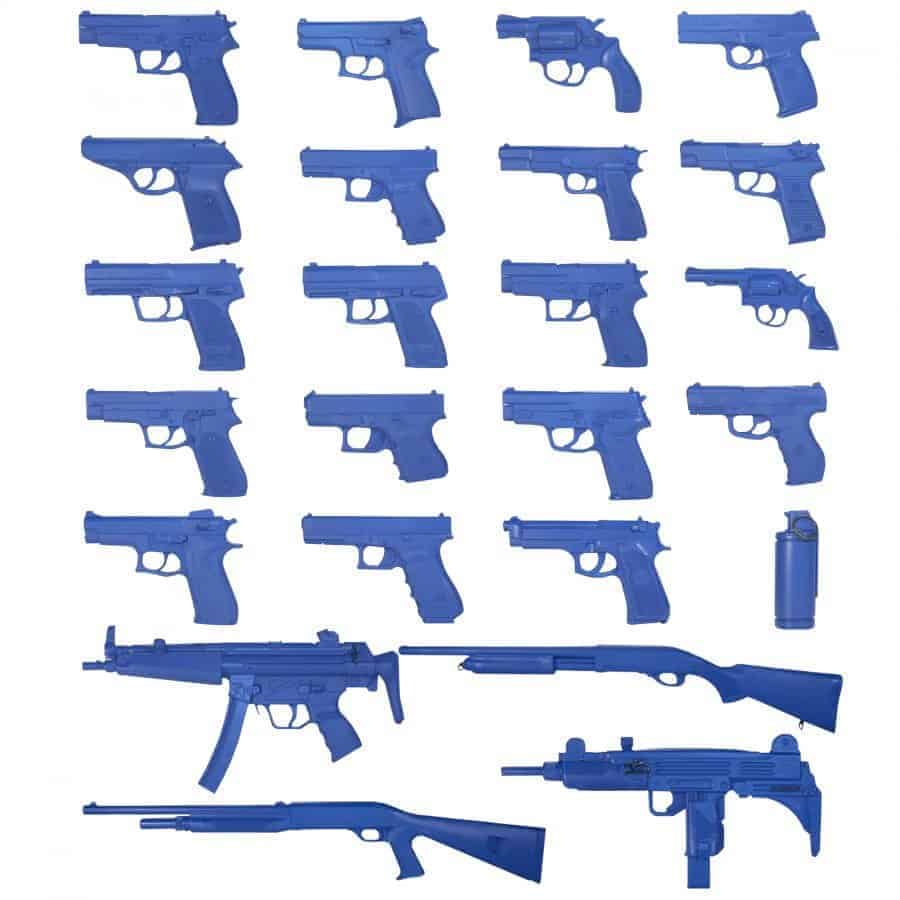 The simulations on the market

Sophisticated simulacra are on the market on which the full loader compartment of the release button has been made.

With these aids that perfectly reproduce firearms in shape and size, you can safely practice performing:

In these steps using the plastic weapon, it will not be a problem if this or the magazine will fall to the ground.

Blue Guns allow the instructor to control from all possible angles that movements are performed correctly and safely,even from positions that are not advisable with a real weapon.

Note that some models are equipped with two magazines of different weight that simulate and allow you to locate the one exhausted by the one replenished.
This “sophisticated” blue gun simulation allows you to train yourself to make the magazine change, where one of the magazines (the second, the one you need to insert, is heavier than the other to meet the need to create a proper “muscle memory”.
In this way you can learn the different techniques of tactical or one-handed emergency gearbox and that in some modes require a decent dexterity and even danger with a real weapon.
This allows the student to learn how to perform complex manipulations by avoiding pointing the weapon in dangerous directions given the difficulty of handling the weapon as in the case of the use of the thigh, etc.

Inert weapons you always have to treat them as if they are true, you have to avoid putting your finger on the trigger or pointing them at people or objects when you do not want to hit.
You never have to make any difference with real weapons so as not to take bad habits. 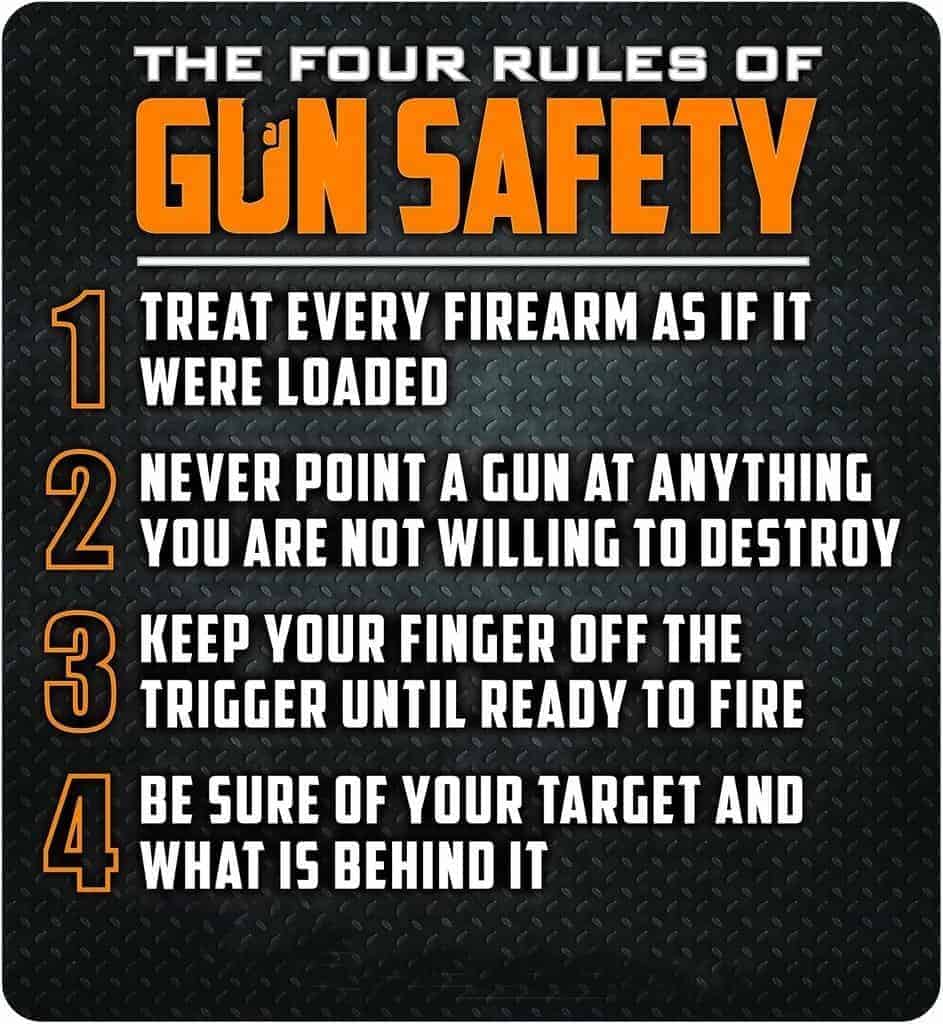 These simple objects are essential tools for training and must be provided in all places where they are taught to handle a weapon (T.S.N., private or military polygons).

They are fundamental tools not only for the initial learning of the correct handling of the weapon safely but along the entire training path, also advanced, especially in the operational field for the study of extractions and movements in dynamics with a weapon.

The principle must be to always use the weapon sequence like this:

A principle also used in the study of the GOI knife.
Good training and remember that weapons are not a game.
Remember: Train Safe and Train Smart!
Andrea
50
Thanks for SHARES
ShareTweetPinterest