Knife defense is one of the most complex and discussed topics in combat.

If you walk around on social media and forums you will see over the years the debates on the subject have continued bringing more than the time useless phrases and little technical research.

Often social media is made by people who have no experience on the specific topic and who start parroting with the usual messages like “you can’t defend yourself”, ” you’re dead”, “run away”, who basically never answer the question of people who really want to look for an answer.

Now it does not mean that there is an answer to everything but certainly on the knife there is since now the presence of numerous security cameras have repeatedly filmed knife assaults where people have survived.

Knife combat but in general cutting weapons combat is the most complex form of struggle and for this requires training and training constancy of the highest level.

No, I’m not bad and I’m not doing it to demotiva you on the subject on the contrary, but to give you a real starting point but based on a daily and real practice on the subject.

There are no shortcuts and certainties, but a constant and daily training because this armed discipline requires constant application.

The knife is not a game and you cannot start from the wrong perspective and vision because this leads you to work on unrealistic aspects and that in addition to esports to incredible risks leads you to work in areas that are not meant to save you but to put you in danger.

Although even the “experts” or supposed such who often see themselves on social channels you see that they do not have a real knowledge of the topic and no type of training done with experts in this regard but despite this they improvise in statements that appear more mours (rhetorical figure consisting in juxtaposing, in the same term, words that express contrary concepts.) that explanations that respond to the needs of those who want to train seriously.

I repeat that knife formation is among the most complex in men’s combat!

This series of posts are born because I see constantly sterile discussions on the net, on social, in forums on this issue and I find it absurd because it means that no one (except rare exceptions) does the only thing there is to do.

And I’m not telling you about the first choice, to run away, because it remains the best strategy to preserve yourself!

It’s nothing dishonorable but clever.

The personal defence instructor has a dual responsibility

One of the first tasks of a real personal defense instructor but not the only one, is also to disillusione the student at a certain stage of learning to erase his false certainties, the false illusions and bring him into the raw reality of street fighting with the knife.

Unfortunately the Dunning Kruger effect is always lurking but when it comes to the knife you have to be more conservative because the tip and blade are the simplest but most devastating tool that humanity has created and made available to everyone.

Any idiot with bad intentions can take a steak knife from very few euros and do serious damage without any training. 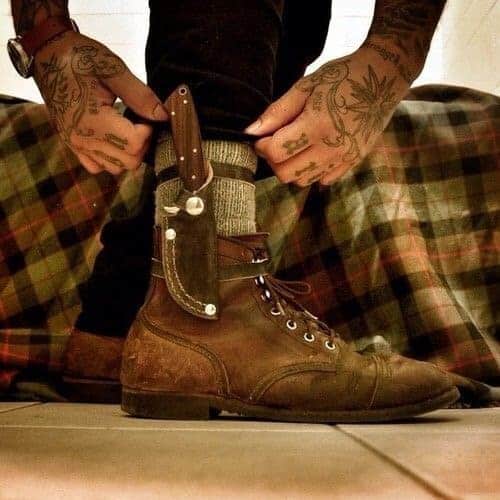 When you do knife sparring for the first time you create a general absolute amazement of impotence, the terrifying effectiveness of knives is often underestimated if not completely ignored by people who practice the most diverse martial arts.

This is absurd, but that is what happens!

Just see the astonishment by taking the test with the white T-shirt and the knife smeared with paint to understand after a few seconds the huge number of cuts on the shirt and arms.

Now if you think that only a madman carries a knife in his pocket, here I wanted to tell you that the world is full of crazy and that the thugs take him for sure and hardly a good person will come and argue with you and pull out a knife.

Try to read the news episodes and you will find out how every day people are reported for carrying a knife or threatening with a knife, if not knife assault.

Each country then has its own emergencies regarding the knife and every culture has its own ways of carrying it and using it.

The knife is the weapon that has gone through the centuries helping the man in his tasks and also saving his life but many times it has been used to commit heinous murders.

Remember that the knives:

According to law enforcement statistics, most situations of violence and robbery happen up close with cutting weapons.

Now I know you like to study martial arts, Kick Boxing, Judo, Boxing, BJJ, etc. I also really like combat sports, but if you don’t study the knife in a street situation you’re fucked because almost certainly there will be a knife, small, large, hidden in the girl’s purse, in the dashboard of the car, etc.

If it is not a knife it is an improvised object such as a broken bottle, or percussion objects such as a stick, a pole, etc.

Train beyond your martial art,get involved.