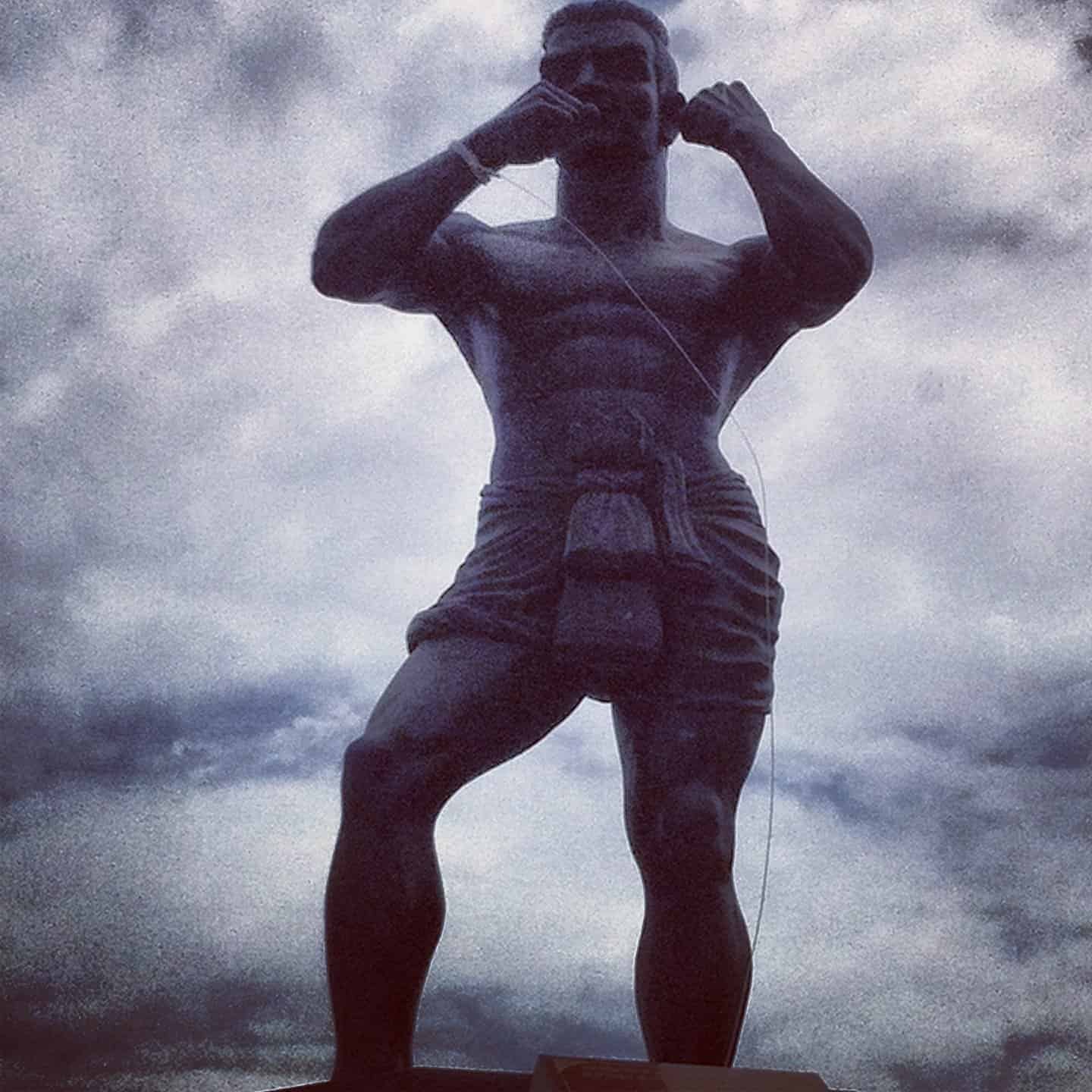 Legend has it that after the fall of Ayutthaya, capital of the Kingdom of Siam, in 1767, Burmese soldiers imprisoned a group of Thai men, mostly Thai boxers, among whom was the strong warrior Nai Khanom Tom.

On March 17 of the same year, the King of Burma organized a celebration in Buddha’s honor, during which meetings were organized that pitted two disciplines, the Lethwei Burman and Muay Boran, to show both of them the most effective martial art.

Nai Khanom Tom was chosen to represent Muay Thai, as opposed to the great Burmese champion. 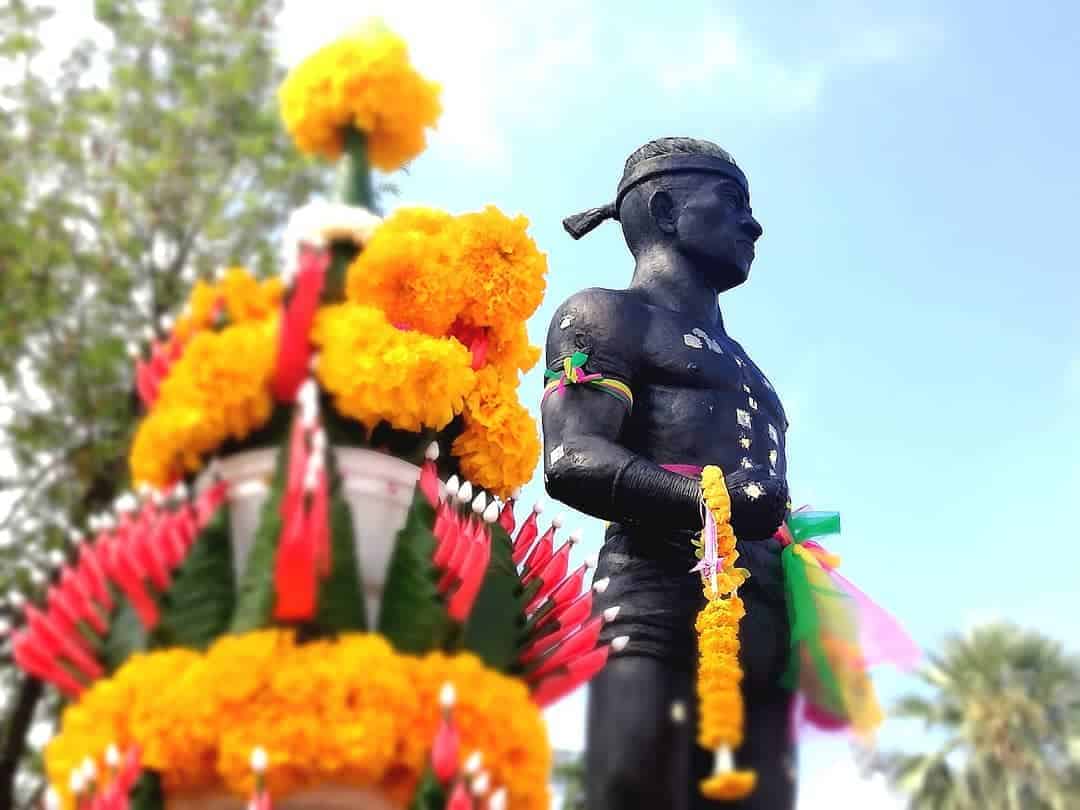 The Thai warrior won by knockout on his opponent after scoring a series of beautiful combinations of arms, legs, elbows and knees.

However, the referee invalidated the match because he said the opponent had been “hypnotized” by Ram Muay (typical ritual dance) performed by Nai Khanom before the start of the match, which literally enchanted the spectators present.

At that point the Burmese ruler decided to have the Thai athlete fight first against another Burmese champion, and then against 8 other warriors, in sequence without any rest between one match and the next.

The young NaiKhanomTom managed to defeat all his opponents and at that point no one wanted to fight with him again.

So the King, enchanted by the extraordinary skill and incredible stubbornness of the Thai warrior, decided to pay homage to him and all his fellow prisoners.

Since then, every year in Thailand on March 17 is celebrated the national day of Muay Thai in memory of the hero Nai Khanom Tom. 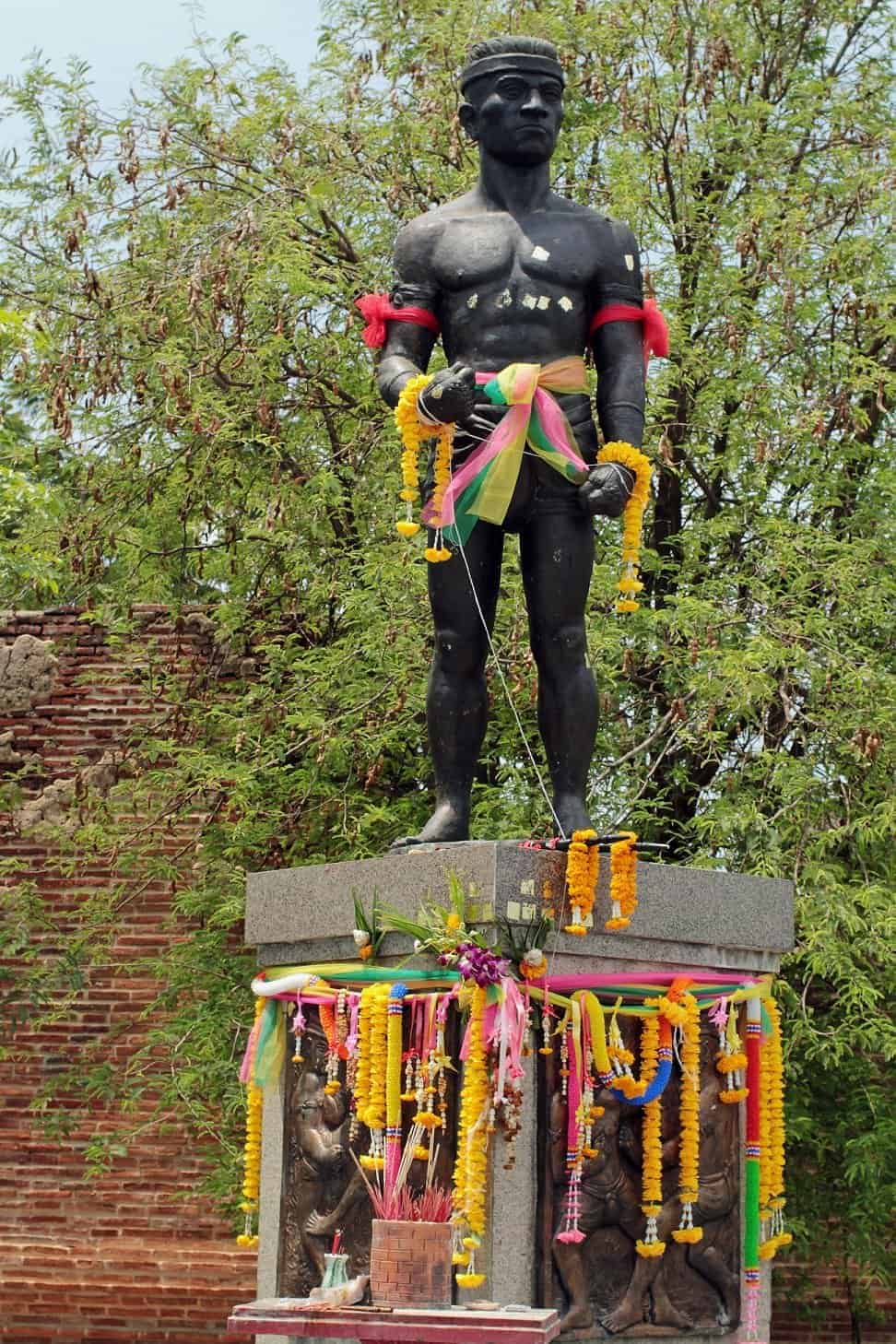 At the time of the fall of the ancient Siamese capital in 1767, when the destabilized city was destined for destruction, Burmese troops commanded by Phra nai Kong captured a group of Thai dignitaries (among them, of course, several warriors) imprisoning and deporting them.

In 1774 the Burmese king Mangra decided to organize in the capital Rangoon, a celebration of seven days and seven nights to honor the pagoda where relics of the Buddha were kept; He then ordered a gladiatorial meeting to the death between the Thai prisoners and the best Burmese fighters.

The ring for this event was erected before the king’s throne and, on the first day of celebrations, a high-ranking Burmese nobleman forced the prisoners to bow before Mangra, beginning to taunt them by publicly humiliating them and mocking their worth of their strength.

King Mangra amused ordered his subject to prove his claims and turned to the Thai prisoners asking if any of them felt comfortable accepting the challenge that had been launched:

“those of you, alone, will have the courage to stand up against my best warriors by defeating them, will have freedom in return for themselves and for your companions, and thus be able to return to your homeland as a hero, otherwise you will all die.”

The entrance of Nai Khanom

A man stood up, had a thin waist, a large chest and mighty shoulders; came out of the large group of prisoners walking slowly.

His bearing was solemn, his movements as loose and fluid as those of a tiger as his steely muscles darted under the taut amber skin; an apparition that instilled fear and respect.

The Burmese warriors, seeing him, moved away and let him pass, the Thai stopped in front of the king and, without bowing, said in a calm and firm voice: “I accept the challenge”.

When the Thai prisoners saw those who had accepted the mortal challenge an irrepressible jolt of joy filled their hearts, perhaps the gods had not yet abandoned them and to their rescue they had sent their champion Nai Khanom Thom, one of the strongest and most valentiful experts of Mae Mai may Thai of the whole kingdom of Siam.

The Thai warrior, always slowly, made his way to the ring; His eyes were like glowing escapses and at every step he looked more and more like a tiger than a man: “the king will soon notice the mistake he made” he seems to have whispered.

His mind returned relentlessly to the images of his return to the village, just before he was captured, when waiting for him he found instead of smiles and joy, the severed heads of his parents, his sister and many of his friends impaled on spears and left to rot under the sun as the Burmese custom wanted at the time.

He saw those heads, those empty orbits, and their memory crossed his heart like an ice blade; for him there would be no more smiles, no caresses, no love, a dull and pulsating pain invaded his mind as anger and feeling of vengeance invaded his body:

” revenge. Revenge.. Revenge.. It’s time to settle the bill, the circle of your karma is about to close and it will be tremendous! I am your Karma. I won’t need blades or weapons to do my work! Until now no one has ever defeated me in a fight, I have never lost and I do not intend to do it this time, I will win at any cost.”

A referee introduced him to the ring in front of the large Burmese crowd from every corner of the kingdom to see the fighting, the haggard group of Thai prisoners cheered and incited him because Nai Khanom Thom was their only hope, their future and their lives depended on him.

The Thai boxer began performing the sacred dance Ram Muay, arousing even more the derision of the audience as the referee scrambled to explain that it was a ritual sacred to the Thais with which the master and loved ones were honored and required the protection of spirits before the battle.

The beginning of the fight

When the start signal was given, Nai Khanom Thom attacked his opponent as a fury by overwhelming him with a series of elbows to the chest and causing him to collapse to the dead ground collapsed in a matter of seconds.

The referee, however, judged that the k.o should not be considered a sign of victory because, in his view, the Burmese warrior had been distracted by the Thai dances.

Unflappable Nai Khanom Thom faced one after another the nine strongest fighters of Burma that the king opposed against him, the Thai prisoners were in turmoil in the face of the blatant injustice of the Burmese and wanted to rise alongside their champion but Nai stopped them (aware that rebelling in that situation would amount to die) and agreed to face anyone the King opposed.

The Thai warrior was unstoppable, a real storm of blows hit his opponents, kicks punches, elbows, knees, headboards, projections, levers and strangulation overwhelmed his opponents by crippling and killing them before the astonished eyes of the king and his subjects.

The last of his nine opponents was a master of Banto (the Burmese boxing) who bore the reputation of being an invincible warrior, who came from the distant city of Ya Kai to witness the celebrations and offended by the skill of the Thai decided to challenge him even if he had not been officially invited to do so.

In a frantic animal fury Nai Khanom Thom attacked him, overwhelming him with a frightening combination of elbow kicks and knees, he was soon overwhelmed, unbalanced and put out watching enough to reach Nai at the throat with a tremendous elbow that killed him by suffocating him in blood.

Before he died, as a warning that the king would not send other fighters to confront him smashed all the bones of his body, one by one, under the terrified eyes of the spectators.

His terrible gesture had the desired effect, and the king did not ask anyone else to challenge the Thai, Mangra shocked and astounded by the incident not only granted freedom to the brave fighter but offered him a further reward and asked what he preferred if he preferred if women or money.

Without hesitation, the Thai said that he would accept two of his wives as a reward (being a good wife much harder to find than jewels and gold) Re Mangra respected the commitment, giving him two beautiful Burmese girls from the Mon tribe and allowing him to return with them and the rest of the prisoners to Thailand where he spent the rest of his days living in peace and serenely.

Since then, the day of the liberation of Nai Khanom Thom has become a national holiday, and throughout Thailand we remember the heroic act of the Thai warrior with celebrations and fights of muay thai in the most important stadiums.

A bit of history of one of the most intense and exciting arts in the world scene that with its fame has earned day after day the spread all over the world.

A day to remember if you are a fan of this form of combat among the most devastating and effective in the world.