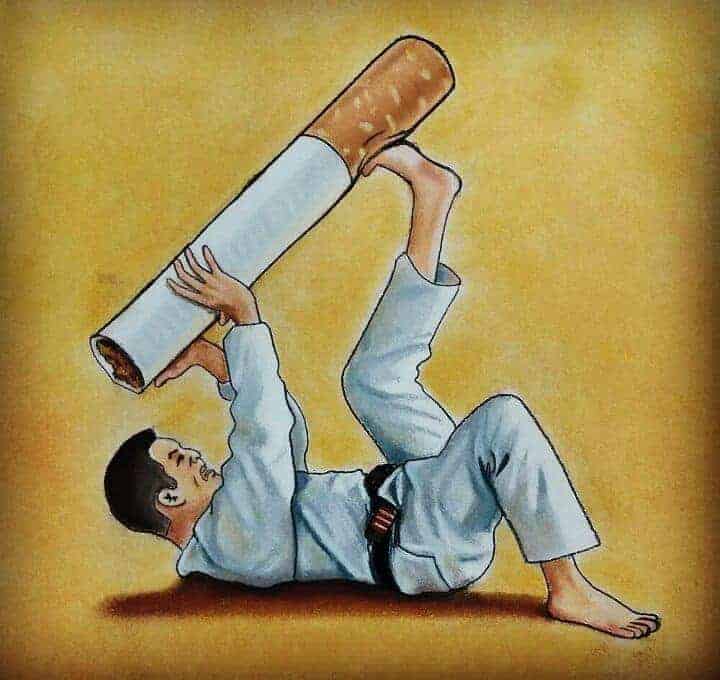 As you can imagine this post is not a aimed at non-smokers but at the boys and athletes who have this vice.

I don’t want to judge your choice but simply help you give you a motivation to quit and to be able to perform higher in your martial art and in your sport.

Unfortunately the TV, film examples of the hard and tough types is always associated with a cigarette in hand and this stereotype seems to like it.

Those who play sports, and want to do it to the fullest of their abilities, cannot smoke: smoking, in fact, negatively affecting breath and muscle performance, is the cause of a lower sporting performance.

The truth, however, is that smoking and sports are irreconcilable, for two reasons:

Numerous researches, however, have revealed that advertising sponsorship favors the recruitment of new smokers and increases the amount of smoke taken by those who are already addicted to it.

And the most serious thing is that the new enlisted are almost always young and very young: from 9 years upwards, without any distinction between industrialized and developing countries.

There are just a few examples of how there are cigarette advertisements in many events, although less and less fortunately. 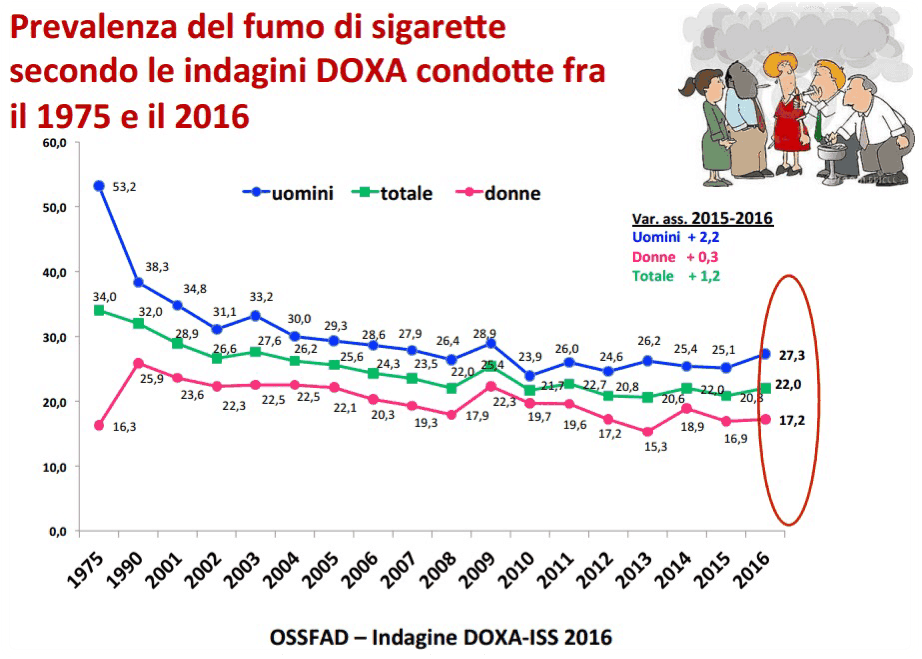 The manufacturers defend themselves by arguing that their advertising is aimed solely at the sale of one brand rather than another and that it does not affect tobacco consumption in any way.

Sport means life. Exercise, in fact, helps to achieve a better state of well-being both physical and psychic, inspires freedom and also beauty and fun.

In contrast, cigarette smoking and the consumption of all tobacco products are a cause of illness and death. Cigarette smoking is now the leading cause of disease and death in most developed countries, causing around 4 million premature deaths worldwide every year.

WHO estimates that by 2030, tobacco will kill more than 10 million people, many more than the victims of HIV, tuberculosis, road accidents, suicides and murders combined.

Only in our country (Italy) smokers over the age of 15 are about 14 million, the majority of whom start before the age of 21 and consume between 11 and 20 cigarettes a day.

In Italy, tobacco accounts for about 30 of all cancer deaths, or 45,000 deaths each year.

To these, they add 8,000 deaths a year from causes related to passive smoking, 10,000 deaths from chronic bronchitis and pulmonary emphysema and a not insignificant number of deaths from myocardial infarc and other cardio and cerebro-vascular diseases.

A total of 83,000 people die each year from smoking-related causes in Italy and one in six to seven deaths is caused by tobacco.

Now as you can see from this list in all sports there are smokers and the world of martial arts is not exempt:

As you can see about 1/4 of the martial arts and combat sports practitioners smoke.

SMOKELESS SPORT!! and since one of the things that martial arts have taught me is to help others I want to have my say on this issue. 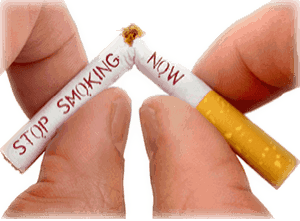 Martial activity and combat sports, but in general in sport is not always accompanied by a healthy and correct lifestyle.

In addition to smoking also a bad diet, alcohol, nightlife that results in little sleep and not resting enough affects your sports performance.

But speaking of smoking that is the theme of today, if it is true that the vice of cigarettes is not as widespread among sportsmen as among the general population, it is equally true that 26.2 of those who practice sports smokes.

With marked differences between the two sexes: 34.9 of men and 17.6 of women.

Analysis of the data shows that in some sports smoking is more widespread:

It also emerges that male sports smokers accounted for a third of the general population, females a fifth. 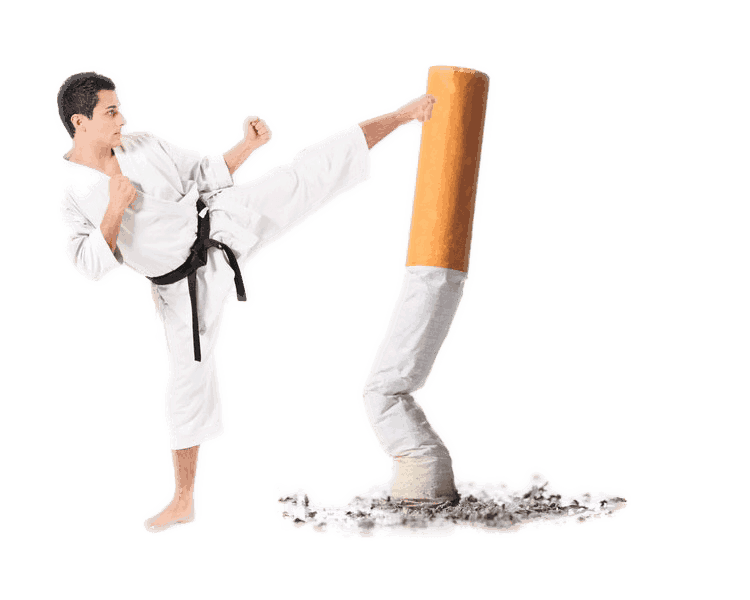 The more you smoke, the lower the frequency of exercise you can do. 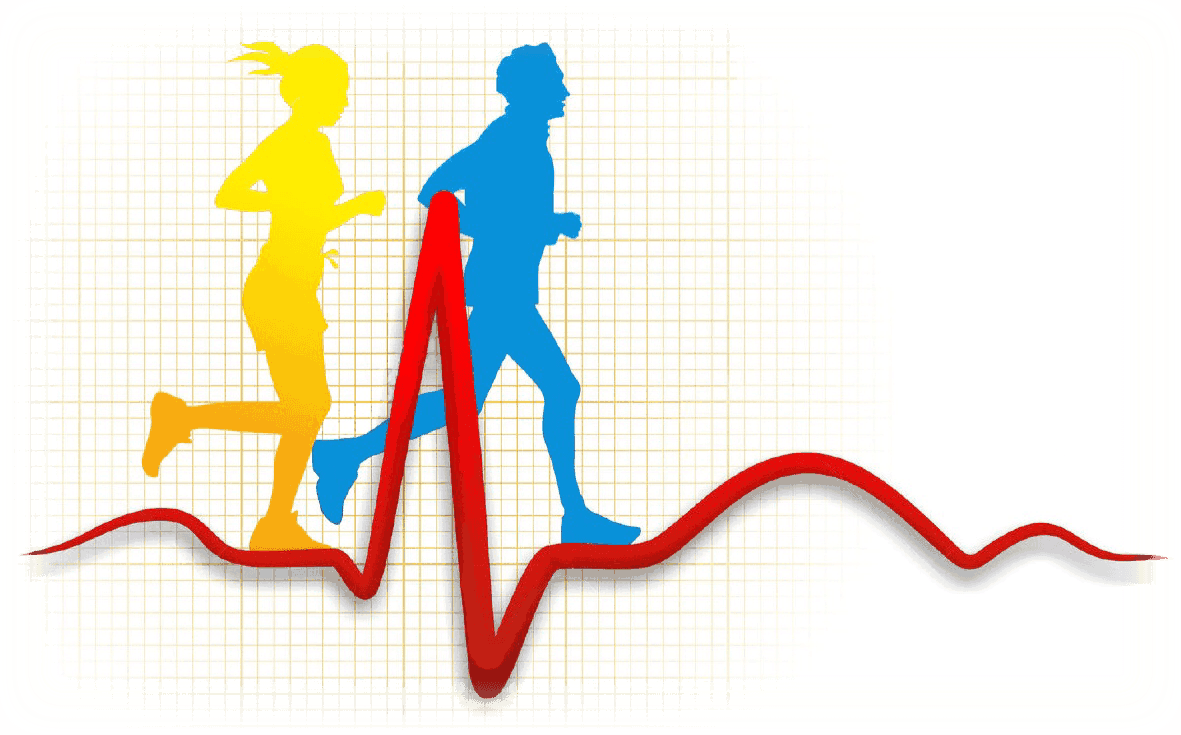 The more you smoke the less you run.

The effects on the sporty performance of smoking were calculated by a study of scientists who have no doubt: resistance to running,for example, is significantly lower in smokers than non-smokers.

By studying the run of 6,500 19-year-olds enrolled in the conscript service, it was possible to estimate that in the same time (12 minutes) smokers are able to travel a distance less than that covered by non-smokers.

In the same study, among 4,100 joggers who had taken part in a race that ran over a distance of 16 kilometers, it was found that smokers ran much slower.

The researchers calculated that for each cigarette smoked the time to complete the run increased by 40 seconds and that smoking 20 cigarettes every day made these athletes 12 years older in terms of athletic abilities. In other words, those who smoke and are 30 years old run like a person who is 42.

Smoking therefore negatively alters the sports performance because it causes a decrease in lung capacity and muscle strength.

A team from Aarhus University in Denmark led by Christian Klausen quantified some of these effects on a group of young people (average age: 24.5 years) accustomed to smoking between 5 and 15 cigarettes per day.

The researchers calculated the consequences of 3 cigarettes smoked before performing a 9-minute exercise and then compared the values obtained with those measured after the same effort on a control sample (young people who had not smoked).

These were the results:

The effects of tobacco are the same in amateurs and professionals. However, they are more prominent in un-trained subjects.

These results mainly come from two components: nicotine and carbon monoxide (a colorless gas produced by the incomplete burning of tobacco leaves).

According to a study carried out by Antonio Todaro, of the Italian Society of Pneumology of Sport, in smokers the rate of carbossiemoglobin is on average 4-5 with peaks immediately after smoking that reach 9, with negative consequences on sports performance.

Bronchitis and infections reduce the lung surface of oxygen exchanges, in this aiding by the dust and solid components of tobacco (tar, for example, is a very harmful carcinogen, the action of which is mainly exercised on lung cells).

A year of abstaining from smoking is enough for aerobic, anaerobic and workload to increase.

If, on the other hand, you stop playing sports for good, but not smoking, you cannot be considered exempt from the consequences of tobacco, as 3-4 months of inactivity are sufficient to cancel out the benefits of years of exercise.

Gregory Hirsch of the Division of Respiratory Physiology and Medicine at the University of California Medical Center, studied the immediate effects of cigarette smoking on the cardio respiratory system during physical activity.

The research subjected 9 male subjects to physical exercises on two separate days, inviting them to smoke three cigarettes before exertion on the second day alone.

Scientists calculated that the oxygen supply decreased by 4 after smoking.

They then identified the immediate, so-called acute effects of smoking: irritation of mucosa membranes with changes in the tone of the bronchi, increased vaso-communication and uneven regional distribution of blood flow, as well as increased breathing frequency, pulse beat and the appearance of tachycardia.

It can be summarized, at this point, by making a distinction between the short-term and long-term effects of cigarette smoking.

Short-term effects of smoking on the sport 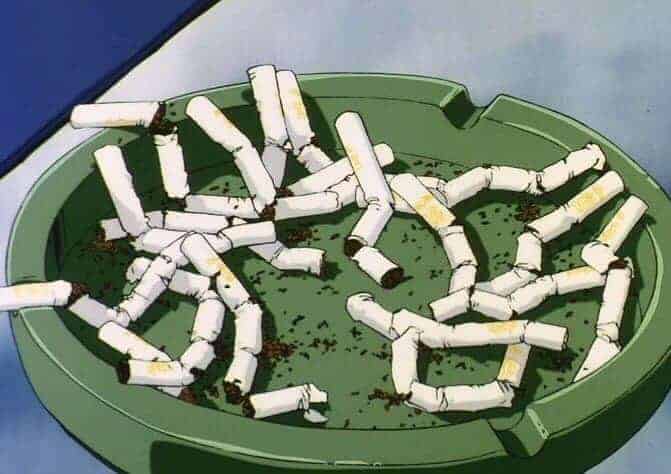 Not all sports are equal, and not everyone urges the body in the same way.

There are physical activities characterized by “light” efforts, prolonged over time. In this case the glucose is burned completely providing a lot of energy.

Such sports are called aerobic.

On the contrary, subjected to short and intense efforts the body burns glucose only in part producing little energy and a lot of lactic acid.

In this case we talk about anaerobic sports.

In the practice of a combat sport the metabolism is aerobic during slow phases or play breaks, while it is anaerobic during phases that require greater physical intensity.

Now you have to look not only at the combat phase but also all the phases that relate to training and martial training and combat.

Martial arts are a mix of the aerobic and anaerobic system.

In both cases, smoking causes serious damage and should not be underestimated.

Consequences of smoking in aerobic sports

Consequences of smoking in anaerobic sports

Martial arts and combat sports are a mix of these systems. 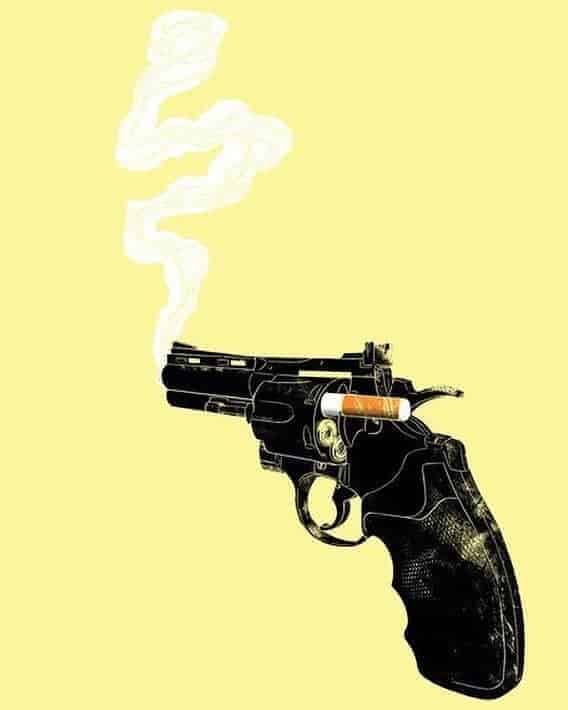 Sports events are important educational tools in the prevention of smoking.

Nothing is more effective, especially to raise awareness among young people.

Here, then, are some occasions when sport has openly opposed smoking, on the side of health and well-being.

Fortunately, in the world of sport, cigarette sponsors are increasingly banned in leagues.

It is time not only to refuse sponsorships from cigarette manufacturers, but also to take the front line in the fight against smoking.

Taking advantage of the popularity some athletes enjoy it is important that they make an example campaign for the youngest.

Even the experts: technicians, escorts, etc., obliged to smoke only in “reserved areas”.

It is precisely among athletes that a less accommodating mentality towards cigarettes is spreading.

I’m not here to make a speech if it does you good or it hurts but one thing is for sure, it affects your performance and your performance so my advice is to stop, you also save a lot of money that you can use to buy equipment, participate in internships, etc.

Now you have some more information I hope, to you the choice!.

I know there’s also pollution, contaminated food, etc. but you do your part not to think that there’s always something bigger because that’s always going to be there, take your step in your direction.