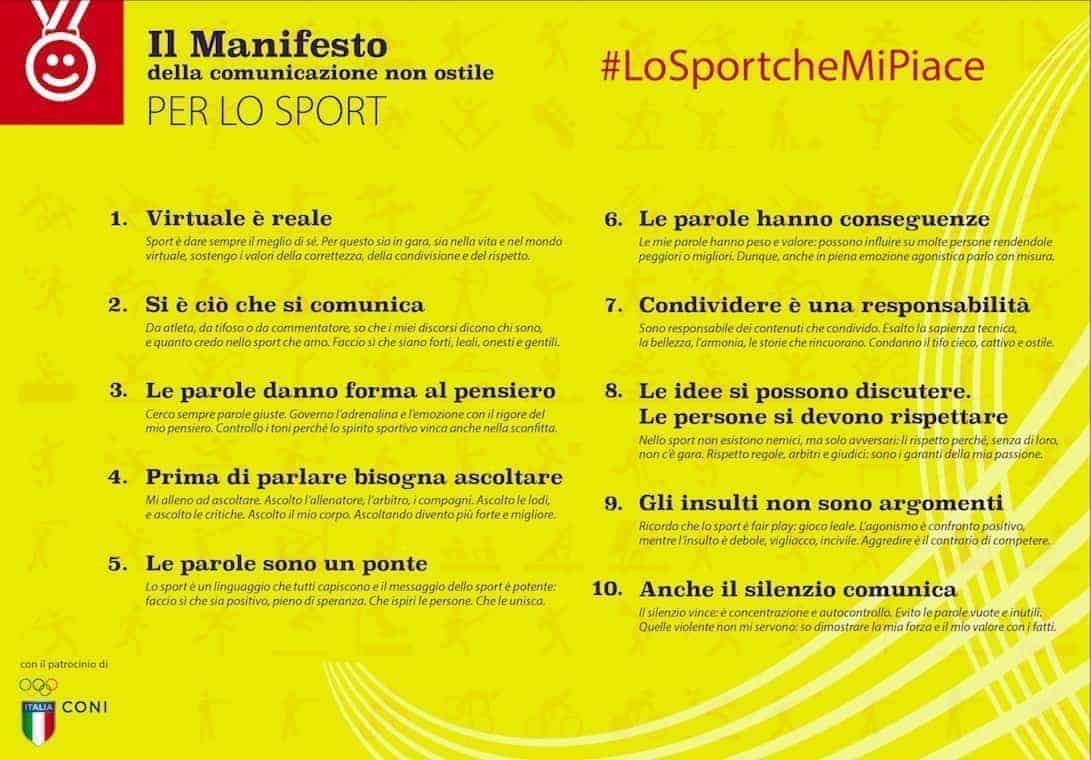 The manifesto of non-hostile communication are ten simple principles of style to be inspired to re-establish a direct, sincere and based on the noble values of the dirty,so as to avoid a hostile language in typhus and communication. (Nonprofit Association Words O_Stili)

A social project to raise awareness against violence of words

The contribution of more than 100 athletes, clubs, teams, federations, companies, journalists and communicators linked to the world of sport was the guide to the decline of the Manifesto of non-hostile communication for sport.

On the Internet, on television, aggression often dominates with comments, tweets, posts, statuses and stories often written hidden by a fake or very anonymous profile.

It is true that social media is virtual places, but it is true that the people who meet there are real, and that the consequences of certain messages or cultures are real to the point of influencing reality.

Sport is also not exempt and not only in football, in recent years trash talk has invaded combat sports as if it were a fashion with attitudes and phrases disrespectful to the opponent, to other cultures, etc.

The UFC is full of such situations although fortunately there are also very positive examples.

“Virtual has become real” because the spread of social media is now pervasive in the lives of all people and we have to be careful how we use words and instead people think through social media that they can say what they want without any filter, even the worst things.

This manifesto aims to try to empower and educate network users to use non-hostile forms of communication and to make people realize that the hostility of the virtual world has real-world consequences, serious and permanent in people’s lives.

Personally, I believe that legislatures and rules need to be updated in the virtual world!

The 10 rules of non-hostile communication

1. Virtual is real
Sport is always giving the best of yourself. For this reason, both in the race, in life and in the virtual world, I support the values of fairness, sharing and respect.

2. You are what you communicate
As an athlete, as a fan or as a commentator, I know that my speeches tell who I am, and how much I believe in the sport I love. I make them strong, loyal, honest and kind.

3. Words shape thought
I’m always looking for right words. I rule the adrenaline and the emotion with the rigor of my thought. I control the tones so that the sporting spirit can win even in defeat.

I listen to the coach, the referee, the teammates.

I listen to my body.

Listening I become stronger and better.

5. Words are a bridge
Sport is a language that everyone understands and the message of sport is powerful: I make it positive, full of hope. That inspires people. Let him join them.

My words have weight and value: they can affect many people by making them worse or better. So, even in full competitive emotion, I speak with measure.

7. Sharing is a responsibility
I’m responsible for the content I share. I exatter technical wisdom, beauty, harmony, stories that cheer. I condemn the blind, bad and hostile typhus.

8. Ideas can be discussed. People have to respect
In sport there are no enemies, only opponents: I respect them because, without them, there is no race. I respect rules, referees and judges: they are the guarantors of my passion.

9. Insults are not arguments
I remember that sport is fair play: fair game. Competition is positive comparison, while the insult is weak, cowardly, uncivil. Attacking is the opposite of competing.

10. Silence also communicates
Silence wins: it is concentration and self-control. I avoid empty and useless words. I don’t need violent ones: I can prove my strength and my worth with the facts. If you think words have weight and value, share this decalogue on Facebook, Instagram, and other social networks you use.

Now if I have to be honest I find it a curious way to communicate, a very soft way and it is a form that I appreciate but I want to make some personal observations from those who work in contexts where respect for the rules and ethics “is an opinion”.

A cultural change is necessary but unfortunately I believe that this level of communication is aimed at civilized people, with an ethics and a moral respect for society.

People who already have these approaches to communication and values towards sport.

Those who really need this decalogue are people who hardly understand this communicative message.

I say this with the utmost respect for this initiative but as has already happened several times it seems almost that you forget who you are dealing with.

Some types of people include only two elements:

Now this educational soft line is fine and it’s right to undertake it but I think people who are used to playing from behind a keyboard somehow make a sadistic laugh.

Let it be clear I’m on the side of who made this manifesto, but it’s important to know who’s really on the other side of the keyboard, they’re not people who just say it’s wrong and that good behavior is this.

However, I think it is useful that initiatives should be taken to help people understand correct behaviors to prevent misinterpretations that justify even simple misbehavire without entering into more serious episodes of social communication.

I think it is necessary to rewrite rules in the use of social networks such as, inside your page do what you want but if you have to comment outside your page, on other sites, etc. or on other social profiles, etc. you need to provide official generalities to the portal manager and that all citizens have a PEC but I think this is not because it would also make many initiatives official politically and at that point the virtual world is real!

If you liked what you read and it was useful before you leave the page share the article through the social keys that you see at the top and comments. Thank you very much!