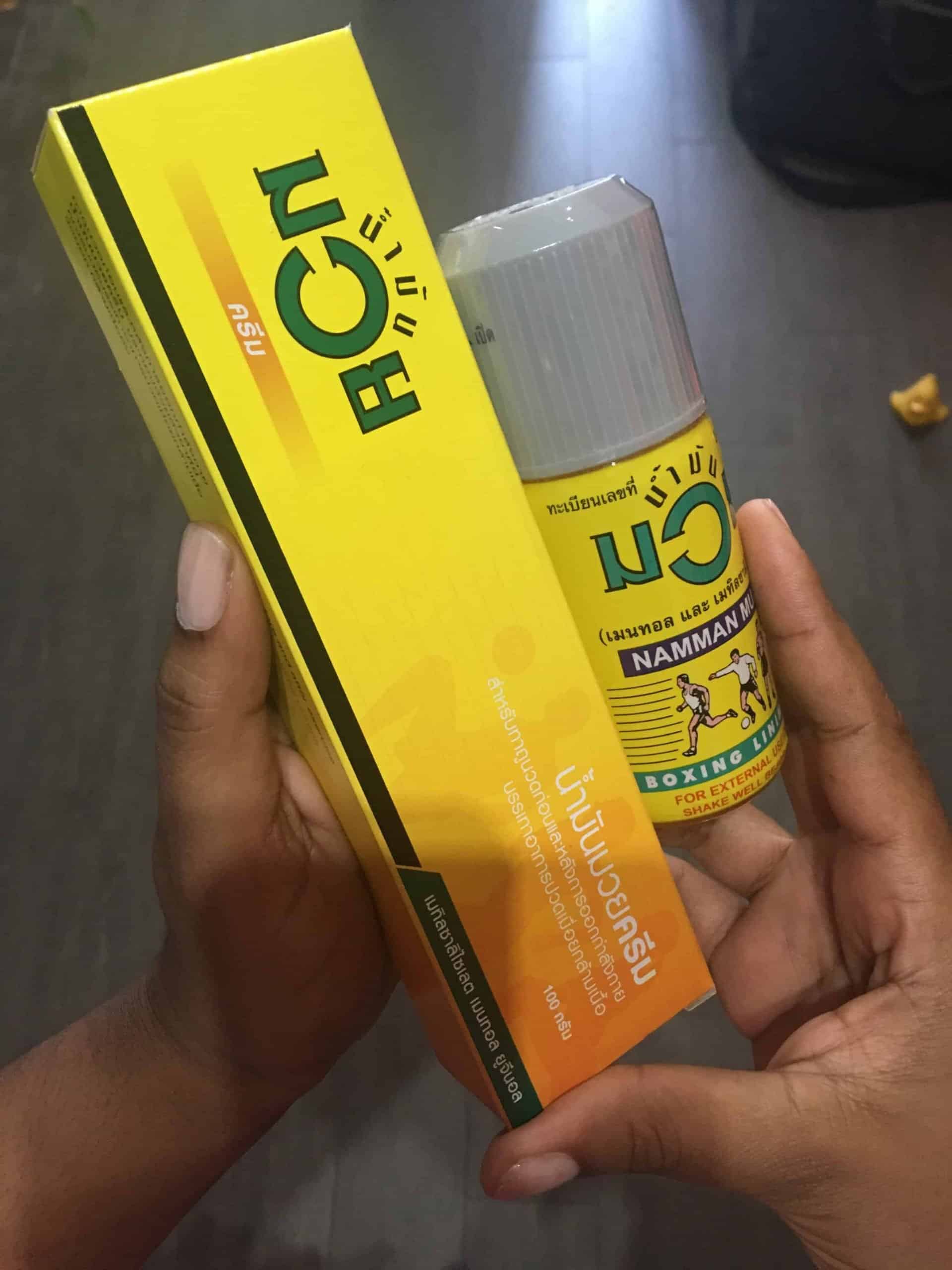 The Thai oil Namman Muay is an analgesic and anesthetizing heating oil to prepare for physical exertion avoiding easy injuries, but also to soothe muscle and joint pain used by Muay Thai athletes and practitioners but not only.

The Thai oil Namman Muay has a characteristic smell that is easy to hear in the various Thai Campus where it has been present for decades.

It is an oil used before entering the ring by Thai boxers for almost 100 years.

The Thai fighters of Muay Thai but more and more often European and American fighters have started to use this fantastic natural product and so I decided to try it out and give you a direct opinion of its qualities.

Thai pharmaceutical company Devakam Apothecary Hall, with its Namman Muay®product line, focuses on the development and marketing of life-changing products for professional athletes and beginners and the physically active population for 85 years. 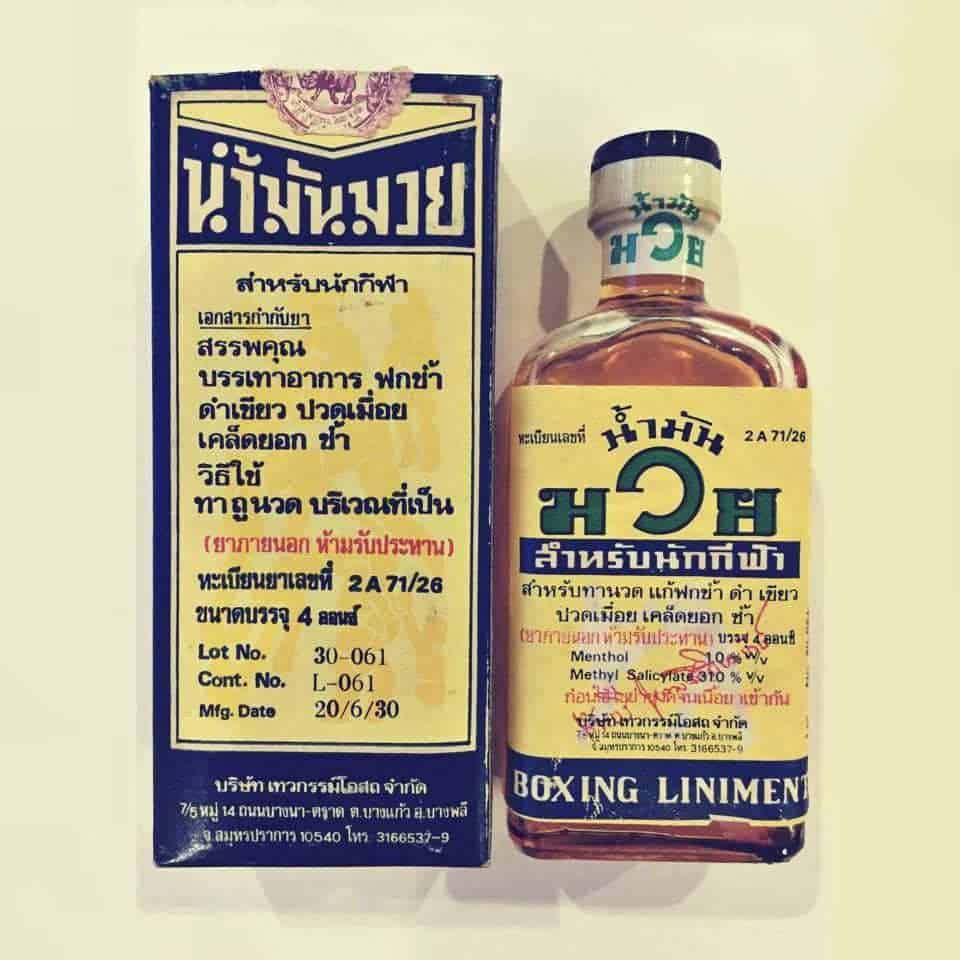 It is a product of the highest quality and that you can now have in Italy but be careful to verify that they are original, my advice is to buy them directly from the site www.nammanmuay.eu so you are sure to use the original product with all its properties and you can also find many promotions that periodically do. 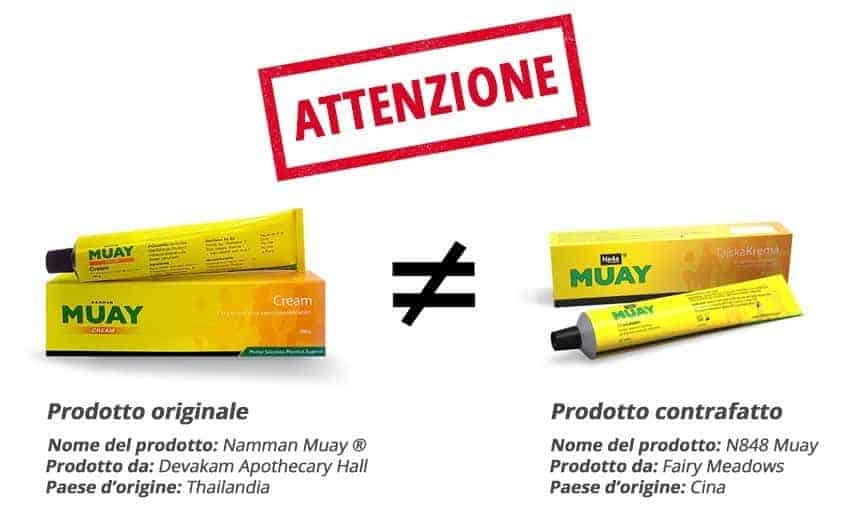 On the European market, recently, a fake copy of the original Thai cream and Thai oil Namman Muay ®, produced by the Cina.La copy is very similar to the original product, but if we look closely at it, we can notice some important differences. The manufacturer of the counterfeit product is N848, while the manufacturer of the original product is Devakam Apothecary Hall.You also have to pay attention to the country of origin, which is intentionally hidden behind the abbreviation DRC (Democratic Republic of China). The product is of suspicious quality, so we advise our loyal customers to review the product packaging if it has not been purchased from us.

Namman Muay is a Thai oil for heating massages to be carried out for preparation for a hard workout or even a Muay Thai competition.

This product is also used to sooth muscles and joint pains, induced by inflammation, trauma or simply by the heavy training that causes the well-known Doms effect. 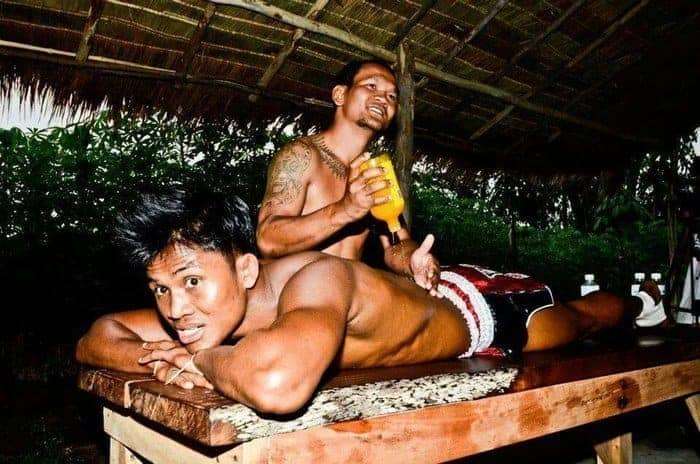 This is typically found by all individuals regardless of training level, and is a normal physiological response to greater efforts, or performing physical activities that you are not used to.

The pain and discomfort associated with DOMS usually peaks between 24 and 48 hours as a result of exercise, and is extinguished within 96 hours.

Generally, a greater perception of pain occurs with increased efforts, and a more frequent execution of unknown activities.

Other factors that affect DOMS formation include muscle stiffness, contraction speed, fatigue, and angle of contraction.

Now to better understand the principle of action of this product, you have to refer to a simple concept, the materials, therefore even those that make up our fabrics, are more resistant to stresses and performing when they are at certain temperatures.

This principle does not apply to 100 of materials, whether inorganic or organic, but in the case of human tissues it is essential.

That’s why a good coach always advises you to warm up before starting the real workout to maximize performance and to ward off possible injuries. 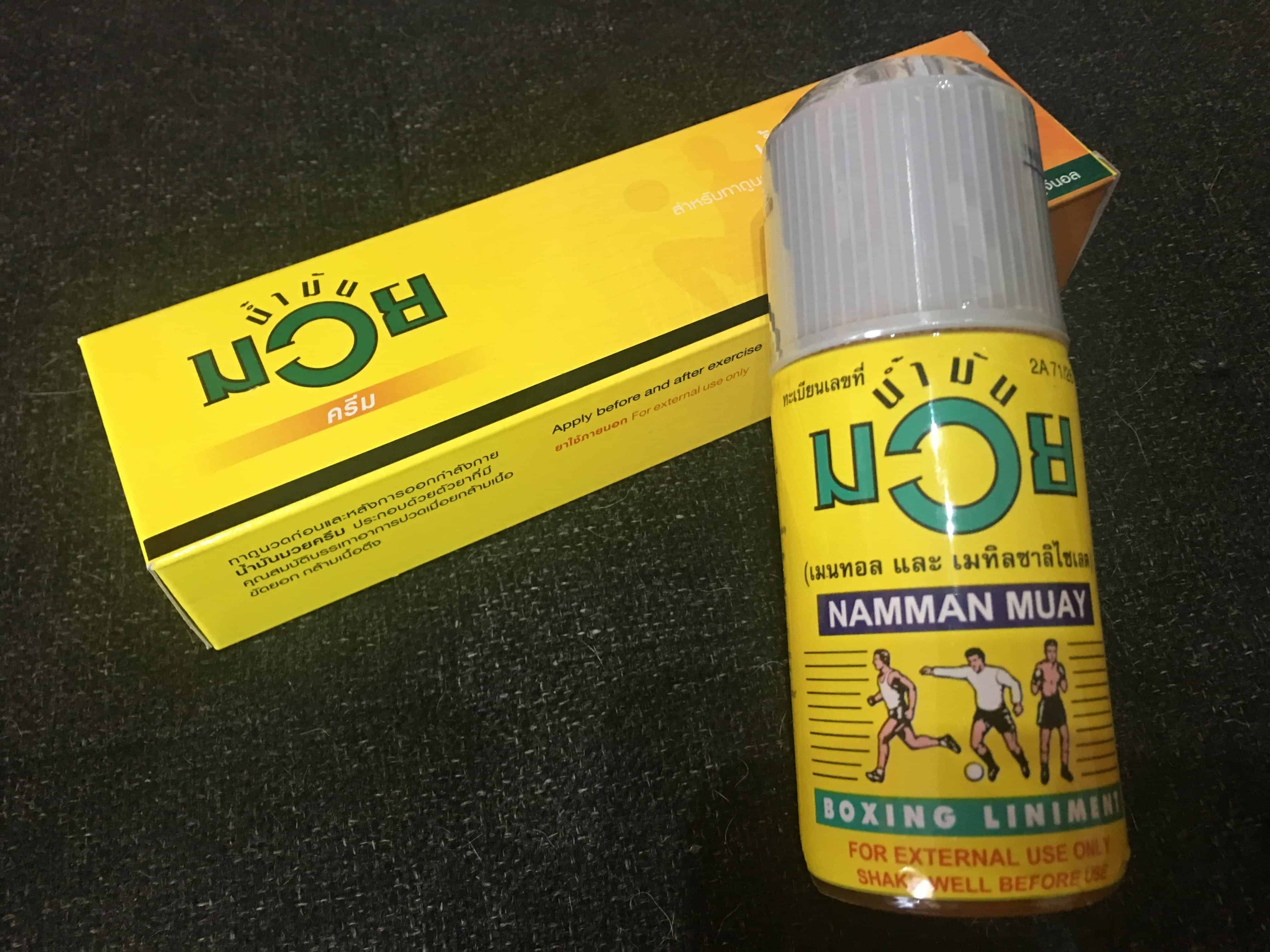 So there are two main uses that you can make of this product:

In the first case, the heating properties will be used especially for the reasons I told you before, while in the second you will take advantage of the analgesic and anesthetical components that the different ingredients present possess.

So regardless of whether you have trauma pains, want to prevent them or just feel sore after a hard workout, this oil is what you’re looking for.

But let’s see the ingredients that have these properties: 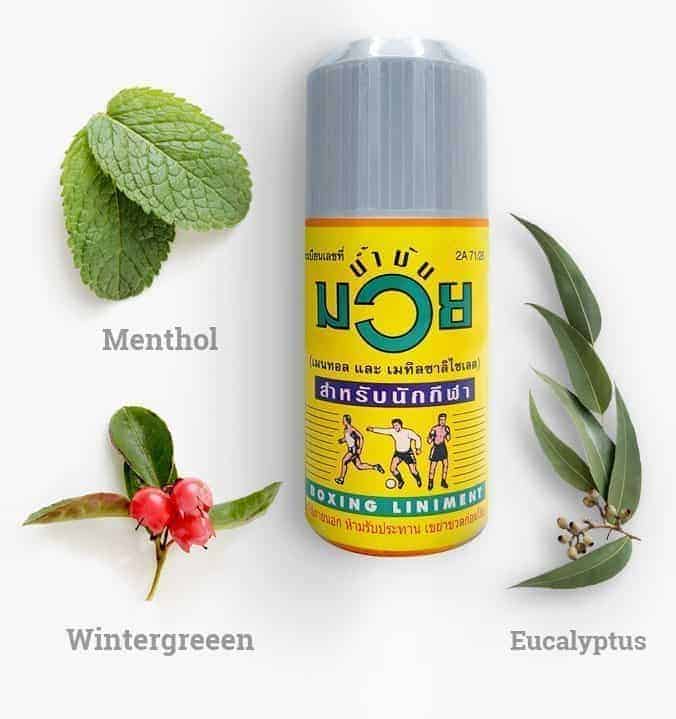 How to use it in general

The first thing to point out is that it is an oil for external use, absolutely do not ingest, and do not bring in contact with the eyes and mucous such as the inside of the nostrils.

Apply enough oil to the affected part and massage until fully absorbed,do not cover the part you have massaged and wash your hands well after application.

Another tip to give regarding the use of the product is not to replace it with a proper heating before starting the actual workout.

It’s an accelerator for your heating but it’s not to avoid heating.

The oil if used as a heater will improve the preparatory state to the exercise and not to replace it.

So before you start doing exercises, routines, drills, sacks, sparring, etc. make sure you have warmed the muscle groups in particular. 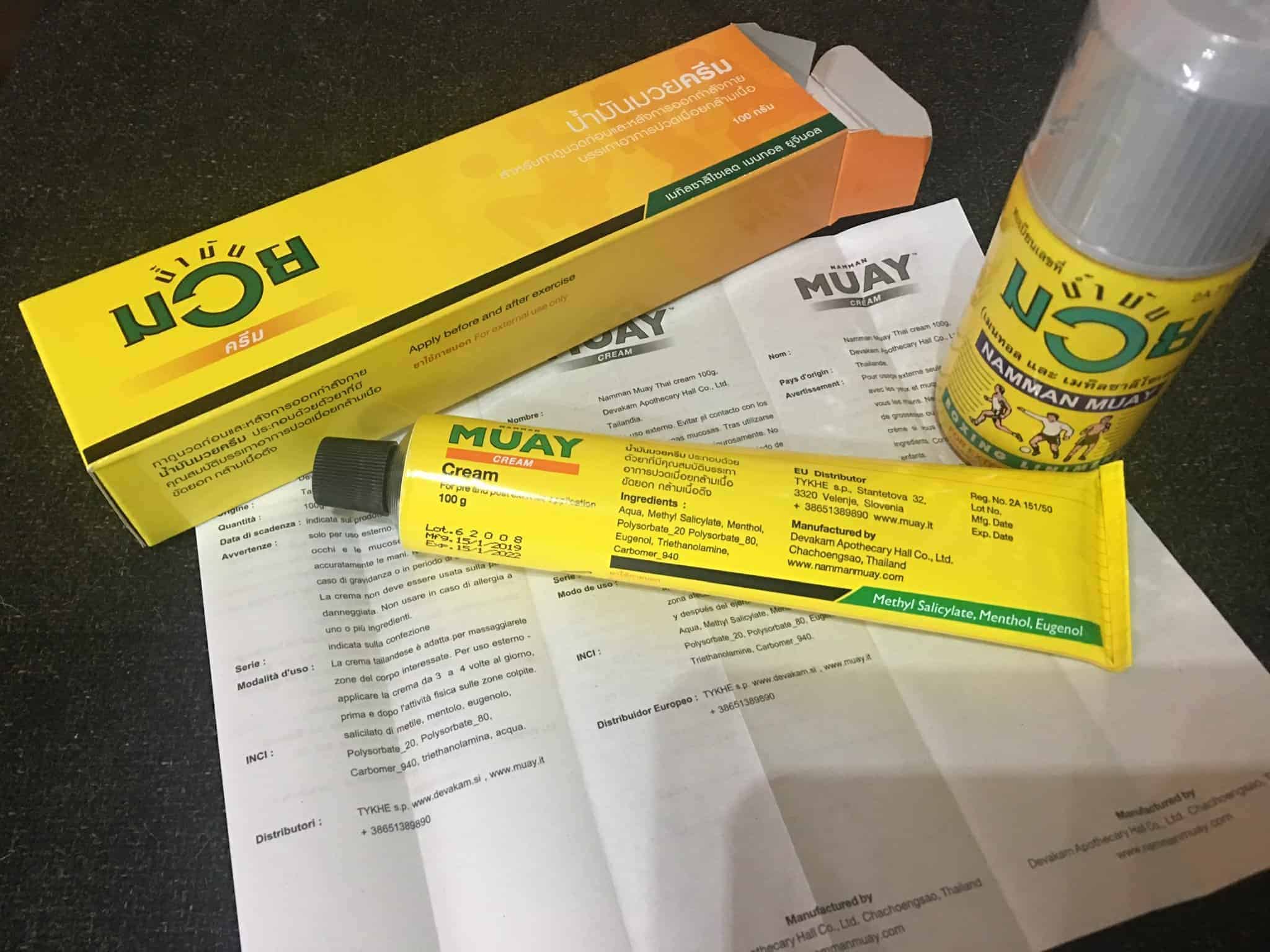 How should a fighter compete or sparring use it?

The oil (120ml or 450ml) was born for Thai fighters before entering the ring as a muscle and joint preparation. Today it is used as a pre/post workout, sports massages, in physiotherapy treatments and many others. Contains thai natural extracts (methyl salicylate, eucalyptus and menthol) that help muscle regeneration namman-muay-120ml/

The Cream (100g) helps activate muscles and joints for training and is also used a lot by non-sportsmen as it is effective to relieve muscle fatigue, inflammation, cervical, rheumatism etc thai-namman-muay-100g/

Preventing and soothing joint pain with Namman Muay Oil, here are some synergies related to its properties

If you want to use this Thai oil because you have slight joint pain, know that it will help you but also know that you can help its effect through its properties.

Specifically you can think of taking supplements based on condroitin, glucosamine, methylsulfonilmetano and still hydrolyzed collagen, all compounds that support the production of endogenous collagen, help lubrication of joints, facilitate regeneration of deteriorated cartilage and also that of tendons and ligaments. 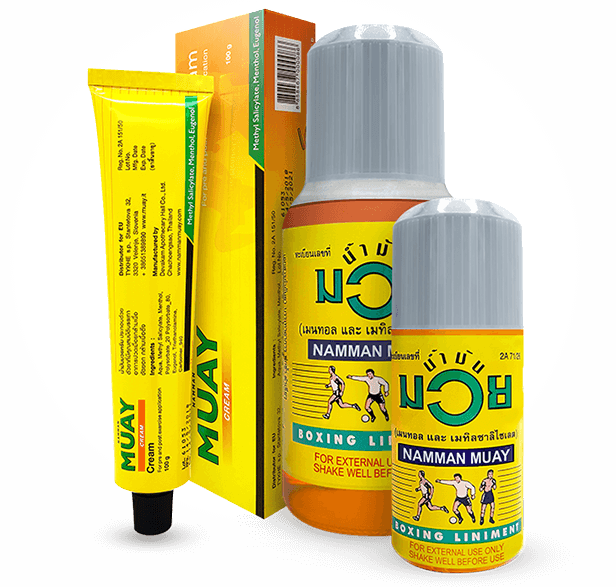 Namman Muay can be found in three formats:

In different formats and quantities according to your preferences and needs.

It varies by format and quantity but roughly varies from:

Where to buy it:

but in a few days you’ll find it on the link http://www.nammanmuay.eu/it 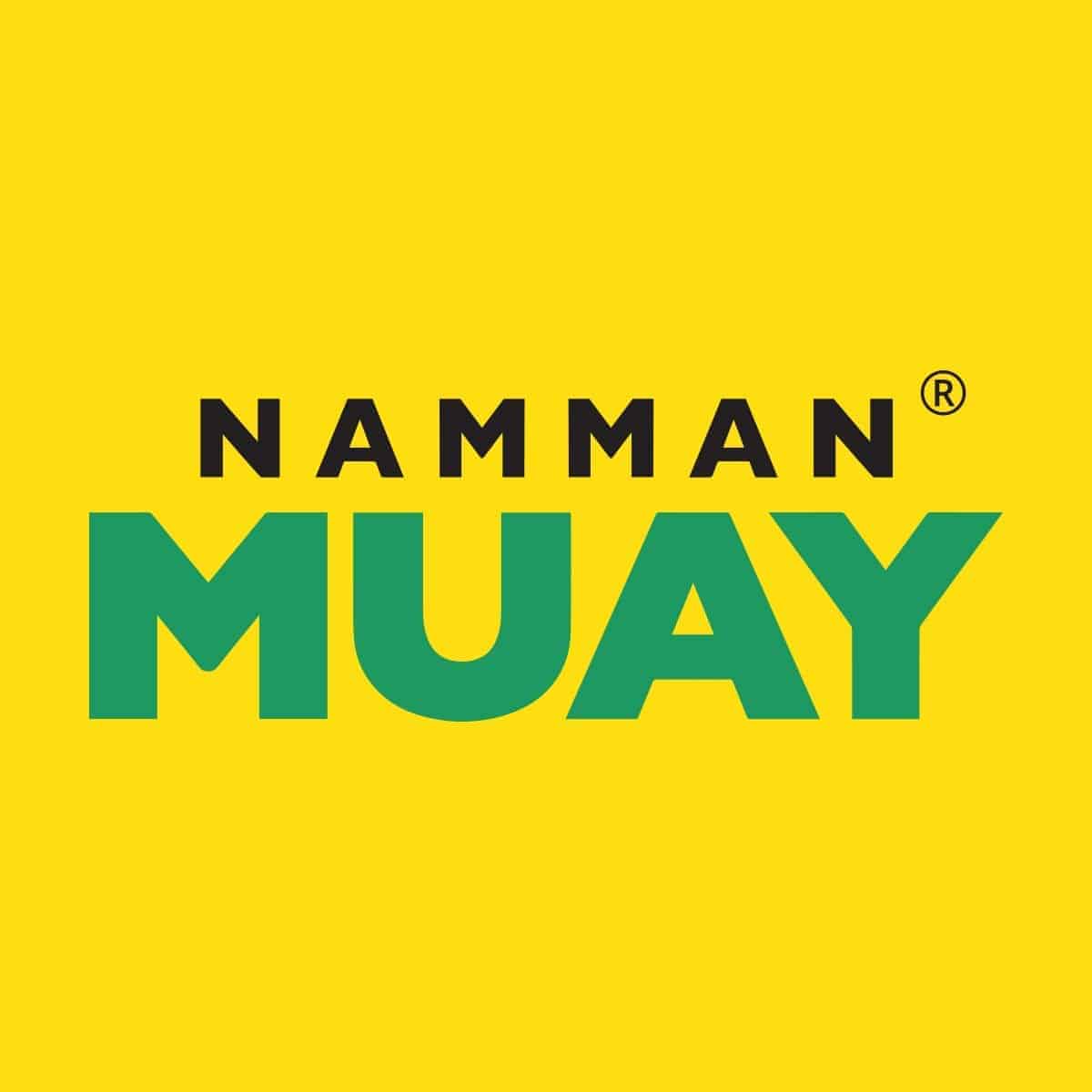 A bit of history without getting bored but to deepen

Once upon a time in Thailand.

The Thai firm Devakam Apothecary Hall was founded as far back as 1930 in Bangkok, Thailand.

Already at that time the owner and pharmacist Thongtos Intratat had formulated the composition of the products at the Namman Muay essential oils® with the aim of warming the athletes of his boxing academy before entering the ring.

The exact recipe for the preparation of liniment was transmitted exclusively orally from generation to generation.

So in those days the exact recipe was known only to a few people. It was not until 1960 that the first products were finally ready for commercial use. 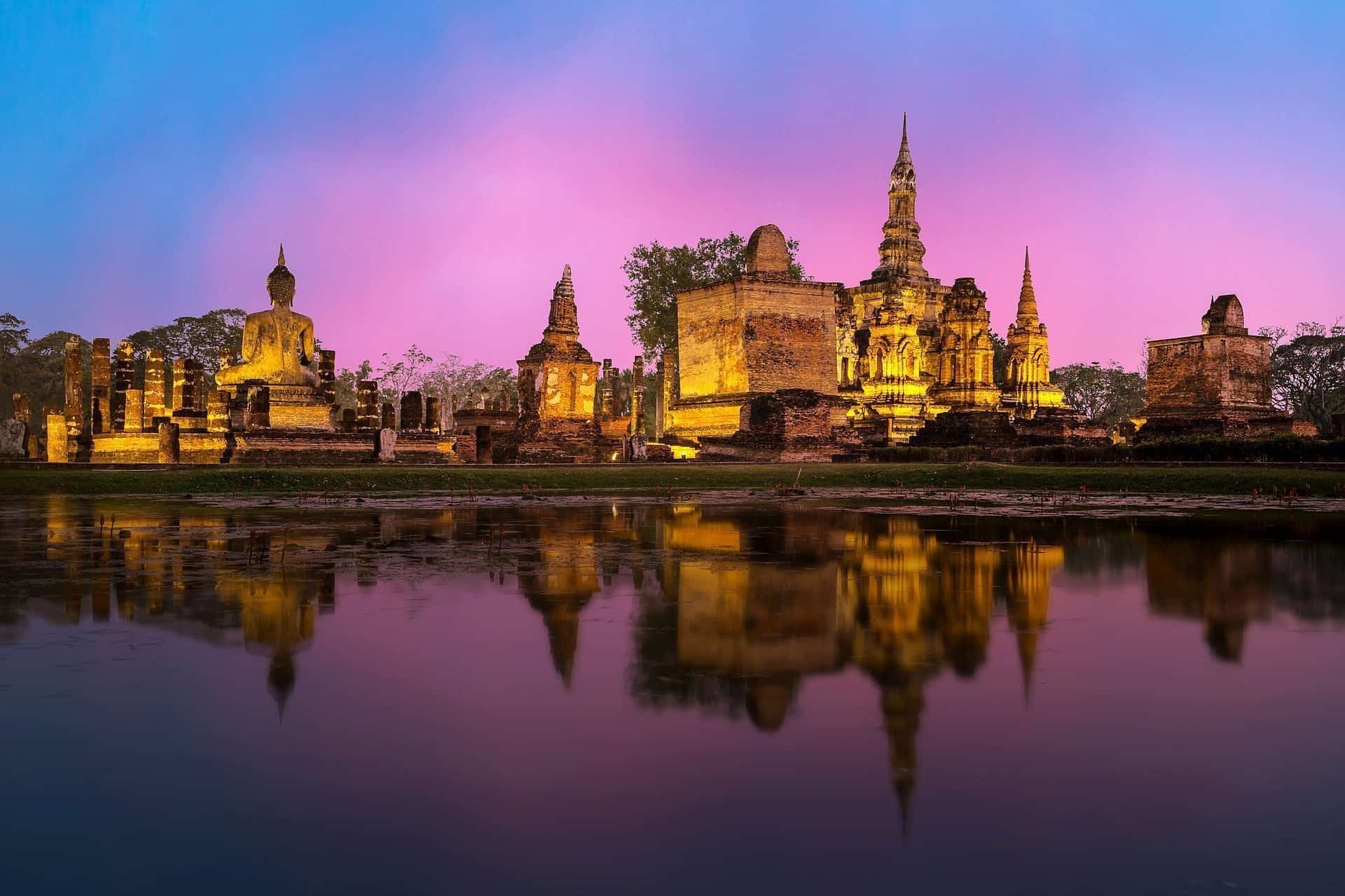 The Rise of Pon King Petch

Many believe that Namman Muay® originates from Thai boxing and its tradition,otherwise known as Muay Thai, but the reality is that it comes from Thongtos’ passion for Western boxing.

His strongest fighter, Pone Kingpetch, was the first boxer to popularize Namman Muay among fighters and boxing fans.

On April 16, 1960, he became the first boxer from Thailand to become a WBC professional boxing world champion by defeating Argentine Pascual Pérez at the Lumphini Boxing Stadium in Bangkok. 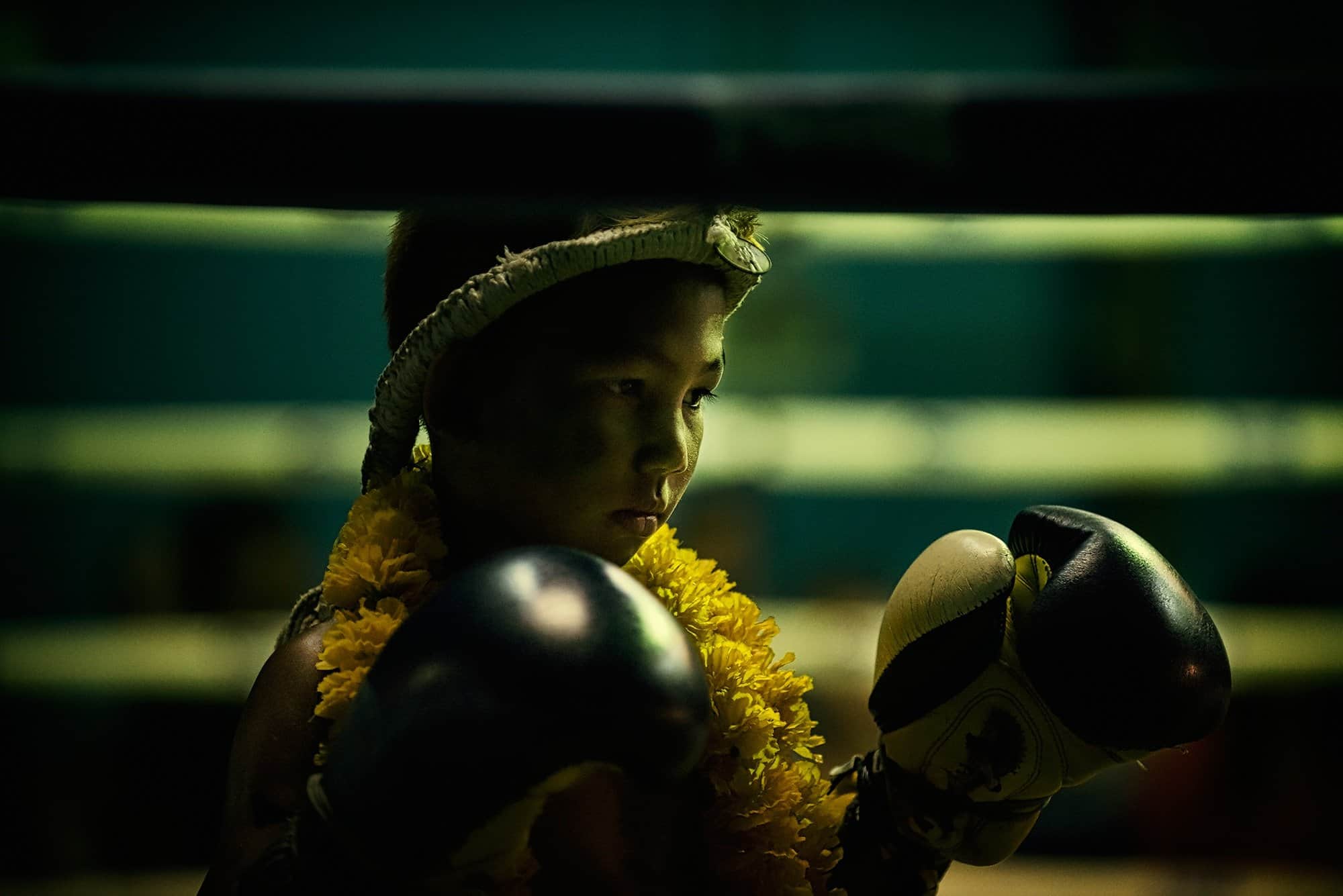 After his success in the boxing world, Thongtos decided to offer Namman Muay® to other sports lovers, who began to use his products with great enthusiasm.

So, in 1960, Thongtos decided to create the Devakam Apothecary Pharmacies company that marked the beginning of the historic collaboration with the world of Muay Thai.

Today it is impossible to find a gym, event or Muay Thai practitioner without Namman Muay®.

The popularity of the products grew too much to be confined to Thailand and spread all over the world.

The original Namman Muay® recipe was modified in 1960 to maximize the effectiveness of active ingredients.

Although the product is now sold all over the world, Namman Muay® is manufactured exclusively in Thailand and only with local herbs of the highest quality. 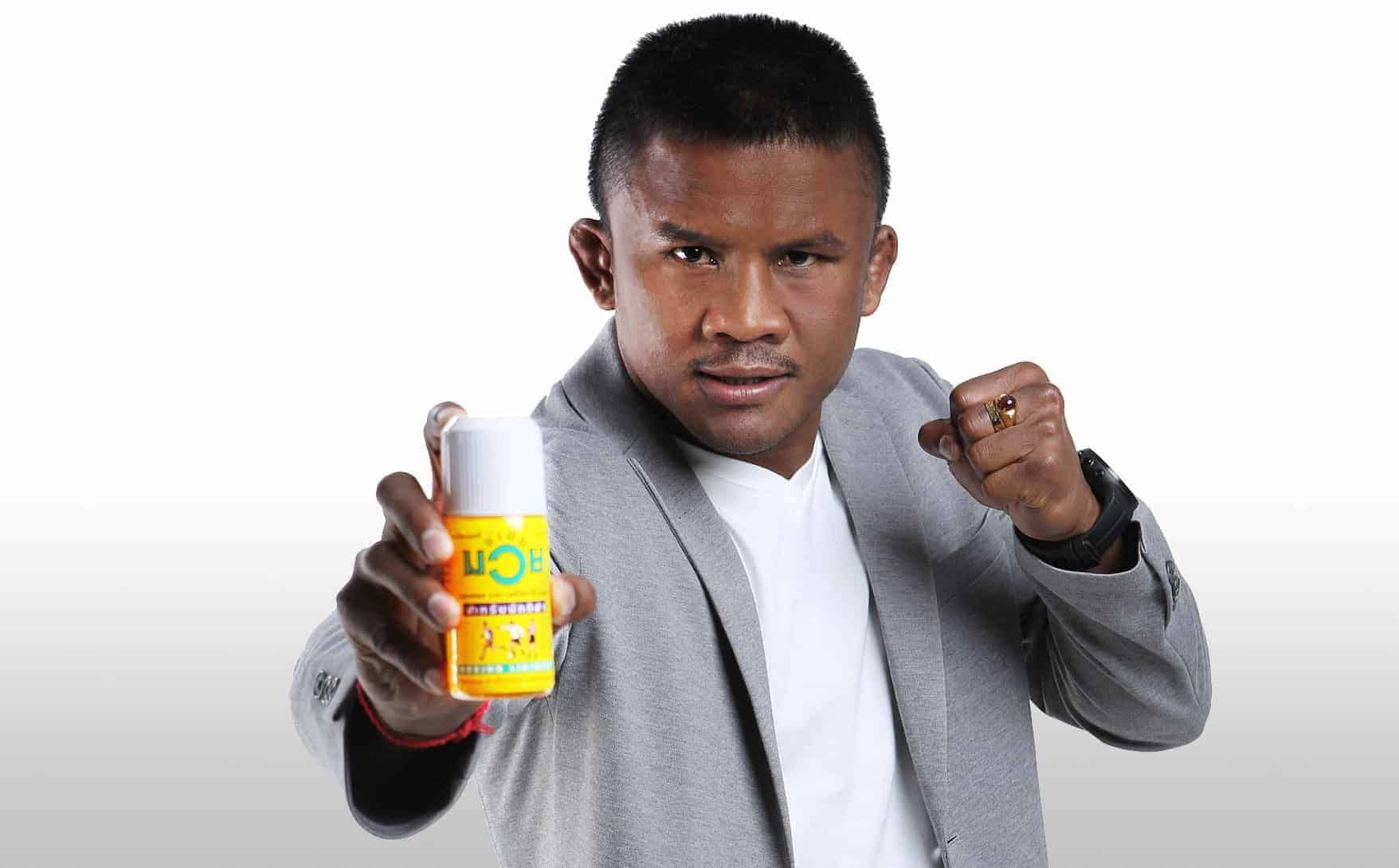 (Doses per pack: Dose: 100 milliliters ) Quantity per RDA dose
* Recommended Daily Rations are calculated on the basis of a diet of 2000 kcal or 8400 kJ. Your daily needs may vary depending on your gender, age and physical activity.
Instructions for use: Rub on the affected areas during Muay Thai training. After use, wash your hands properly, avoid contact with the eyes, mucous and open wounds. Don’t cover after the app!
Warnings: The product cannot be used by people with sensitivity to any of the ingredients contained in this oil. Not suitable for pregnant or nursing women. FOR EXTERNAL USE!
Beware of tattoos just made!


Even if they are certified products before applying it, read the label information carefully before using the products.

Do not use Namman Muay products if:

In addition do not use the product:

Ps. Do not use Namman Muay products on children under the age of 14.

Visit the doctor immediately if you or one of your family members after using Namman Muay:

Don’t forget to bring the products with you to show the original label to the doctor. 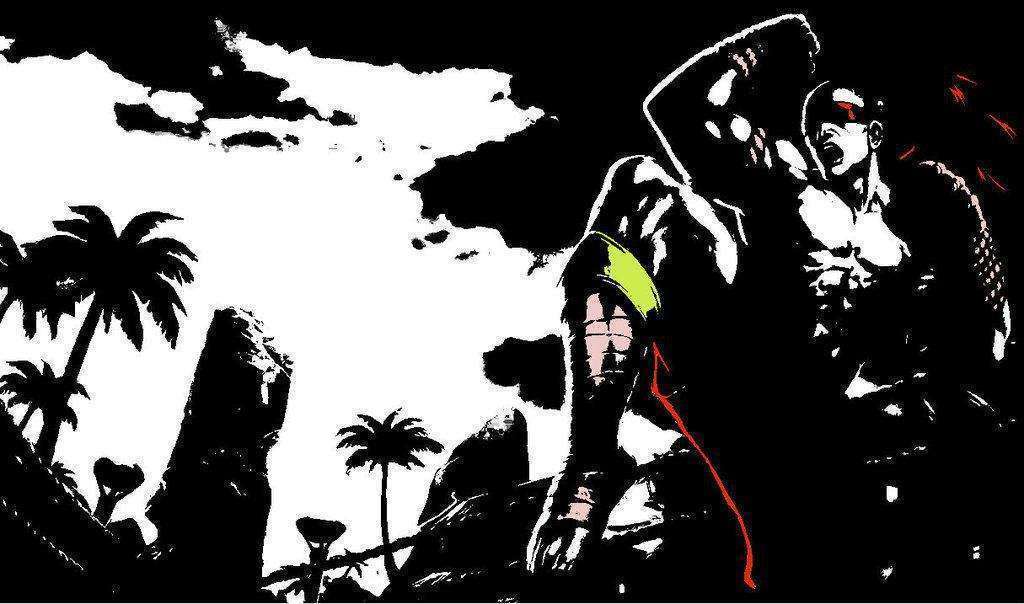 Thai oil is a great product that I recommend you use before every Muay Thai training session and when you feel your muscles sore.


If you carry it in your bag my advice and put it inside one of those diving bags because the problem of carrying Thai oil in your bag always remains the one that if the jar does not close it well or that you unscrew it in the bag you will mash the contents.

Possibly if you have tape use it to stop the cap well after you have used it.


I also recommend it for anyone who practices contact or wrestling sports because it is really very useful to climb parts sore or very stressed by the hard workouts.

If you have small/medium contractions it makes them disappear, soothes the strongest muscle aches.

The only “defect” but it depends on the tastes and for example I like it is the fragrance, a much loved characteristic but that to some can be a little too canforate but it is subjective but already after a few minutes the scent becomes very sweet, then you are a fighter so you are not going to a fashion show.

Sprinkled on the muscles before a workout, you immediately notice it heats up and avoids making efforts or movements to cold musculature, and also if after training you use the cream as I recommended it reduces the effects of muscle inflammation.

The ideal is to have oil and cream!

Especially if you live in a cold country with harsh winters can really be something that helps you in the colder season.

The cost of the product is low and it is worth a try, after I think it becomes a habit, as long as you do not start putting it in the salad too!