Today I want to talk to you about the 7th sector of Filipino kali.

As I have already told you in several articles kali/eskrima/arnis is not only the single stick but is one of the most complete martial arts on the planet.

The 7th area is about the art of kicking kali.

The use of kicks is definitely a weapon that you have to sharpen to have a correct approach to a combat distance that is the long one, but in the case of the Filipino Kali also the short one using a very powerful weapon such as that of kicks.

In the field of personal defense kicks must be used with a different concept that sport because it is not forbidden to hit the genitals and the ground is not always flat and favorable, like clothing suitable for certain movements but in Sikaran there is a lot of attention to this aspect.

The Sikaran is an ancient Filipino art of kicking in combat whose history dates back to the early 1500s, before the arrival of the Spaniards.

It is the art of foot-fighting with which farmers use their strong legs to bring the “intrusive” peasants outside the designated line (Pitak) that has been processed in rice fields of about 25 square meters.

Sikaran and Sipa are both Tagalog terms to say “football”, but with one notable difference: the first is a noun, while the second is a verb.

The Sikaran as you understand focuses almost exclusively on kicks, hands and arms are used only for blocking.

The classic sikaran shot is the Biakid football or “dragon whiplash”.

This kick is similar to a spinning back kick.

However, Sikaran’s practitioners frequently target the back of the head with this kick.

On the contrary, other martial arts mainly target the side of the head with this type of football.

Tagalog is the most commonly used dialect in the Philippines and has adopted as the national language of the country officially known as Pilipino.

The Sikaran is a coined word derived from the root word sikad (football) “.

It is also known as an indigenous martial sport in the tradition of Arnis, Kali, dicho, Buno etc Sikaran is and a pastime of the agrarian Baras Rizal who gather during the feast after a good harvest season.

Constant practice develops an ability to strike with remarkable kicks which makes it very effective;

Unfortunately the original practitioners have long since died, losing the secrets of this art with them.

The Sikaranist (farmers) begin the session by drawing a circle on the ground of the correct size.

The most skilled opponent is often forced to take a handicap, position himself inside the circle and begin to kick each other, the others remain at the edge of the circle.

The goal is for the external fighter to “dislodge” the competitor inside.

The safest opponent would agree to a number of opponents in order to form a circle around them.

When what is inside the circle is “guided” out of the circle, it means defeat and, consequently, humiliation.

At that point the game continues and another competitor takes the place of the practitioner dislodled and the same procedure is repeated.

From time to time, a competitor does not respect the rules and must intervene the referee before the race ends.

The original Baras method of foot combat in its original form has no time limit.

Fighters take time to get exhausted and are beaten enough.

There is no discrimination regarding sex.

The Sikaran only uses the feet as a rule for sport and combat, this is what makes it different, the hands are not used in the Sikaran only for the defensive phase, the fighter uses his legs 90 of the time and his hands on the 10 only to block or parry shots.

Violation of this rule, especially in tournaments, is grounds for disqualification.

Sikaran’s entry into tournaments, particularly those of the international calibre, has made some changes to its original rules such as setting a time limit, expanding the combat zone to twice the size of the original historical arena.

The degree of effectiveness of the shot subscribes to two classifications: “panghilo” (paralyzing blow) and “pamatay” (a lethal kick).

Of course the first shot is in less vital parts of the body, while the goal of the second blow includes vital parts (the heart, neck, head, groin, and spine, all highly vulnerable parts).

The Filipino art of kicking consists of 55 fundamental kicks divided into 3 categories and advanced students must be able to perform all 55 kicks, which also include very advanced complex kicks.

Sikaran is something that approaches Korean Taekwondo but with a different philosophy of using kicks.

There are 3 types of Filipino kicks:

Now going into detail here are the 55 Filipino kicks of Sikaran’s art divided into three types: 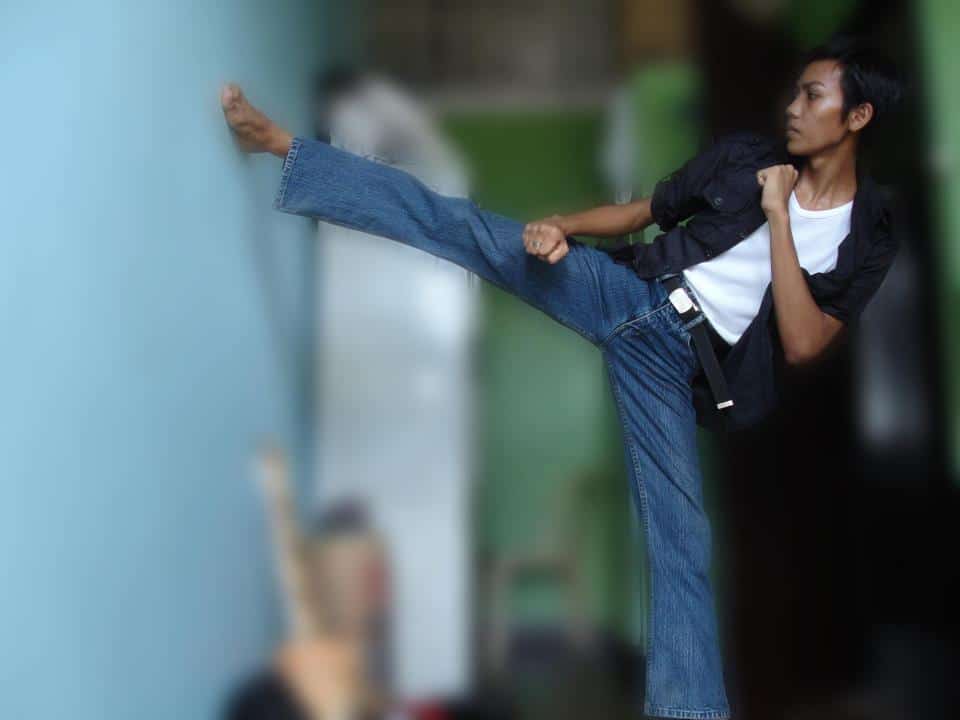 Using kicks; To unbalance the attacker, but not to enter to kick because a Filipino fighter, he will always want to cut off his foot if kicked high or destroy it with a knee or elbow if you throw an average kick. First you have to gain control of the opponent and then hit with low kicks in the legs. First you have to “break the snake’s tooth.”
Sweep; Sweeping forward or backward or sideways are always effective and vital actions to control an attacker, as long as you follow him to the ground and finalize the opponent on the ground by hitting him with kicks, without making him raise any more.
Blocks with legs; these “shields” are developed from the triangle scheme. You can perform internal parades and outside parades. All parades must always be followed immediately by a football technique.
Block to intercept; The Filipino fighter always tries to intercept your techniques and cut your action by interrupting it, so the leg goes to anticipate on your shins, on your hips and in the lower part of the stomach because they are very good points for defense against kicks because they interrupt the action.
Kneeling; The Filipino fighter uses his knees to destroy the attacker’s position and balance, and helps bring the tallest (height) attacker to his height. It also uses your knees to bend and lower the attacker to hit him when he is down.
The side kicks in Filipino art is pulled from very close to the opponent, plus with a position of the cut foot. It is aimed at thighs, knees and tibie. It also uses a lot of low scissors techniques to sweep and bring to the ground, these techniques are to try and use, but you do not have to stay there for a long time to not give the chance to be attacked by multiple people.
If you take a takedown hit and get up immediately, go away right away, don’t stay on the ground if you don’t know there are more opponents.
Heel kicks to the calves; When a Filipino fighter is attached to you in a close range condition he pulls kicks with the heel from a short distance to directly hook your knees, calves or pushes your legs with one leg and kicks heel with the other.
Ps. Consider that the Filipino strategy in sikaran kicks is particular. Kicks are used first to unbalance the attacker (Phase1) and after this first phase it sticks with complex attacks with combinations of hands and feet (Phase 2).

Leg attacks are concentrated in six main areas as targets:

And in/on three levels of height: